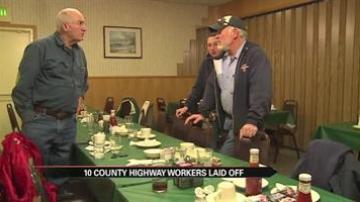 ELKHART COUNTY, Ind. -- Ten people in Elkhart County's highway department were let go Friday morning because the department is being reorganized, according to a letter given to the employees. Those who were let go are the same people who worked around the clock this winter driving snow plows to clear the roads.

"I was told when we had evaluations that I did a great job with stuff, no hint at all that I was leaving," said Jessica Miller.

Instead of plowing the roads Friday morning, ten Elkhart County Highway Department employees were getting dismissed.

"It would have been nice knowing this was coming, I totally didn't expect it for me," said Miller.

"It's not unlike what other businesses do in tough times, they restructure, and that's what happened today," said Yoder.

For the people who lost their jobs, it's more than just business. It's their survival.

They say they have been left with lots of questions but no answers.

The employees have been working for several weeks straight, some can't even remember the last time they had a day off.

"I think it was a Sunday we got off or something," said Miller.

They worked seven days a week, for months.

"One week we put in close to 80 hours and that Friday they brought us all in for a driver's meeting and told us how ashamed they are of us because of the job we done," said Donald Rumfelt.

Rumfelt worked with the department for four years and quit two weeks ago.

Hinken said he was nearly begging to keep his job.

"I offered to take a lesser job, a driving job, anything, and they said there's not position for you," said Hinken.

The department is actually hiring to fill the positions.

"They have openings for this job. There's applications out to get hired and we're getting let go? Ten of us today?" said Miller.

The workers say they were told that they can reapply for their jobs on the website if they want. While it is the same position, it is for a lot less money than they were making.