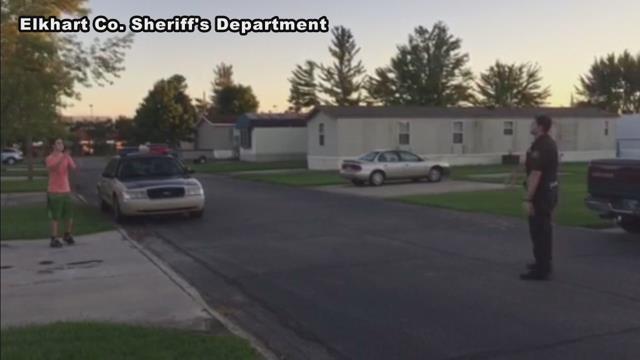 A Facebook video posted to the Elkhart County Sheriff’s Department’s page showing an officer playing football with a teenager is going viral.

Responding to a call in Wakarusa Sunday night Patrol Officer Eric Schuman found 16-year-old Tristen Atchison walking along C.R. 3, around four miles from his family’s home. His mom was driving behind him trying to convince him to get back in the car.

“He wasn’t listening to his mom and refusing to get in the vehicle and wanting to run away to Elkhart,” said Ptl. Schuman.

“I then changed the subject and I asked him if he liked football and he said he did. I said ‘let’s go play catch,’” said Ptl. Schuman.

“It kind of shocked me. It means a lot. It shows me that there’s a lot more people that care than I thought that there would be and there’s people that actually want to help,” said Atchison.

It calmed Atchison down, they went home and he apologized to his parents.

His parents, Mike and Heather Atchison, say it can be a challenge to know how to handle Tristen, who has a mood disorder.

“He went above and beyond his duty that night. He could have just brought Tristen home and left right away but, you know, he took time out of his busy schedule to show us that he really did care about Tristen and really wanted to make a difference, and he sure did,” said Heather Atchison.

Before leaving, Ptl. Schuman says he asked Tristen to give his folks a hug and kiss.

“When I was young I used to get in fights with my parents and my sister. It’s not worth it. In my job you don’t know when you’re going home next. You don’t know if you’ll make it home by the end of shift and that’s scary,” said Ptl. Schuman.