Elkhart County residents not too worried about landfill fire 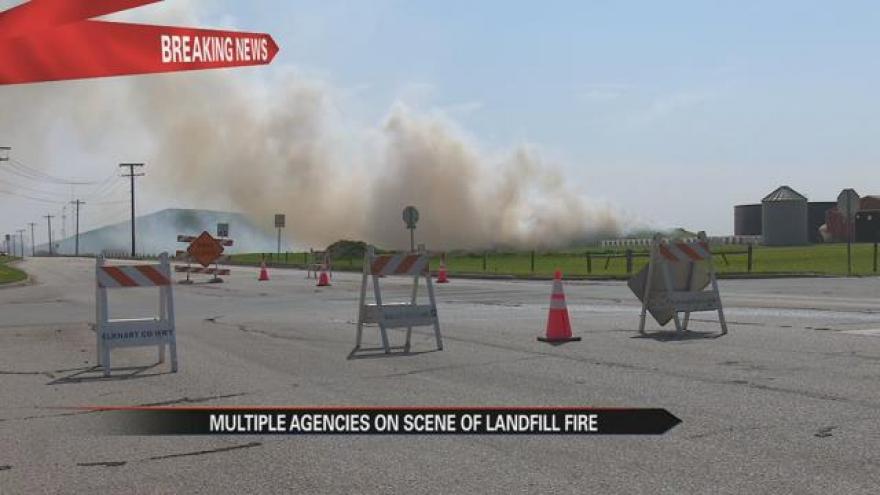 Heather Charles has lived a few blocks away from the Earth Movers landfill on CR 26 for the last 20 years.

When asked if she’s ever seen a fire this large at the landfill, she said, “Never…not as long as we’ve lived here.”

Her neighborhood looked quite normal – besides a slight haze – Wednesday afternoon.

But just down the road, a massive fire continued to burn for at least 14 hours.

“We looked out the front window and saw the smoke,” said Charles. “At the time, we did not smell it or see it whatsoever.”

But the smell and the sights grew rapidly throughout the day.

By late morning Wednesday – because of the size of the smoke cloud and the high winds – the Elkhart County Sheriff’s Department issued a shelter-in-place advisory for residents living around the landfill and as far away as Bristol Street in the city of Elkhart.

“If you happen to smell smoke or see that, basically just shelter in place and make sure that you turn off any units that might bring that smoke into your home or to a building or your business,” said Captain James Bradberry, with the Elkhart County Sheriff’s Department.

Five agencies – including the Environmental Protection Agency and the Indiana Department of Environmental Management – arrived in Elkhart County Wednesday to monitor the fire.

Dozens of fire departments from all throughout the county were also called in to assist in fighting the fire.

Despite warnings from police, golfers were still out playing on Wednesday just a few miles away. And garage doors like Charles’ were still open.

“At first, we were just like concerned if it was going to be hazardous or what not, but they said it wasn’t hazardous,” said Charles. “In the morning, we hadn’t smelled it all day, until probably [around 2 p.m.], and now we got the whiff of the smoke and the burning smell. But, we weren’t too concerned about it.”

According to the company that owns the landfill’s website, while hazardous materials are not accepted at this landfill, things like asbestos, industrial waste, and radioactive material is.

A doctor representing the county said in a press conference Wednesday afternoon that no dangerous toxins had been detected in the air, as of yet.