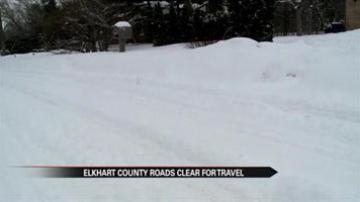 ELKHART, Ind. -- Most of Michiana is under a travel advisory on Sunday, which means if you can stay off the road you should.  But there is one county that stands out among the others.  Elkhart has managed to stay off the travel advisory list even though Michiana has been bombarded with high winds and snow over the past two days.

Officials say that this is a typical winter for them so they were prepared. However, they do warn of side roads that are still very thick with snow.

"This is a good old fashioned winter," says David Dunn, an Elkhart resident.

Looking at Indiana's Department of Homeland Security's Travel Advisory map, you would think the roads in Elkhart are clear, but that is not the case for most secondary roads.

"This has been great, and even County Road 3 which is right there which isn't traveled as much is in great shape," says Deloris Ferris of Elkhart.

Elkhart County is the only county without an advisory.

"This is Indiana weather, we have the highway department out there 24/7," says Tobey.

And their hard work is paying off for residents like Dunn who lives near a county road.

"Good, no problems, safe," says Dunn. "You go a little north it gets a little slick. I think Elkhart County is doing a good job of keeping the roads open."

But it does not take you long to figure out the problem is not with the main road, ABC 57 News went onto a side street in a neighborhood which the travel map does not show, and found snow packed streets.

Tobey urges drivers to use caution if you have to travel in unplowed areas.

"I think the problems that you are going to run into are going to be the back roads might be blowing with some snow drift, and subdivisions," says Tobey.