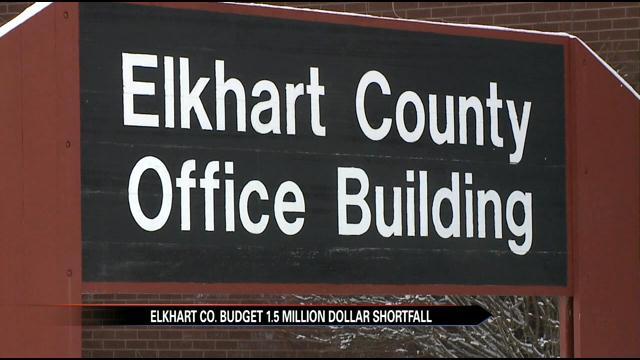 The Elkhart County budget is a bit of a mess. Officials say they are about $1.5 million short of property tax dollars they budgeted for in 2014.

The shortfall came when they estimated too high.

So what's getting cut?

“So we've got at least a $1.5 million shortfall in less revenue than what we expected,” said Mike Yoder, an Elkhart County Commissioner.

It is a problem County Commissioner Yoder said the County of Elkhart can overcome.

“It's not too surprising to us who are familiar with the budget process to say, ‘Oops we made an error,'” said Yoder.

A million-dollar mathematical error that is kind of hard to explain.

“You have to look at the levy growth formula, ratio, we might have made a mistake there. Calculating the circuit break losses is a bit of a guess in the budget stage,” said Yoder.

And the worst part is $1.5 million is just an estimate.

Yoder said only time will tell just how much money the county will have to transfer over.

“And then we'll just go through the year and when we get to the final quarter, we'll see if we need to transfer some moneys into the general fund,” said Yoder.

In the meantime money is tight.

“We're operating county government with a little lower operating balance than what we'd like,” said Yoder.

One department that has always been operating a little lower then officials would like is the sheriff's office.

Yoder said this hiccup will not affect that new allowance.

“We passed the public safety local income tax, so that's generating x-number of dollars that we can use for public safety, so it's the commissioner's plan that we're going to go forward with those wage and salary increases,” said Yoder.

Officials believe the hardest part of the process is setting the budget for next year.

“I've been at this job for eleven years, we've had a lot of really tough years during the recession, so everyone comes together all the department heads and we figure out a way to balance the budget, we always have. We have to,” said Yoder.

Yoder said there is extra money in the county's landfill account so if it warrants that is where money will be moved from this coming year.
Share this article: