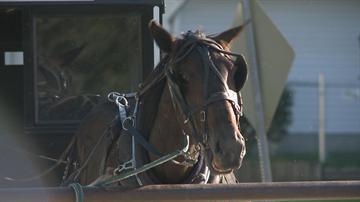 ELKHART COUNTY, Ind. – The Elkhart County Sheriff’s Department has partnered with leaders of the Amish community to distribute driving manuals for horse drawn cart and buggy drivers after a crash last year that took the lives of two Amish children.

On September 5 2011 an SUV slammed into a pony cart that was carrying six children and was driven by a 10-year-old on County Road 24 near Middlebury.  Jeneva Miller, 10, and Joyce Miller, 9, died as a result of the crash and three other children were seriously hurt.  The tragedy sparked outrage in the community and resulted in a campaign by law enforcement and community leaders to improve the system for educating buggy drivers about sharing the road with cars.

“The effort is to reduce the number of serious and fatal accidents involving horse drawn vehicles with the motoring public,” explained Elkhart County Sheriff Brad Rogers.  “Because with those two you know who wins typically.”

The sheriff’s department assisted Amish leaders in writing a manual for buggy drivers that familiarizes them with rules of the road and gives a perspective on what it’s like for car drivers.  It is written from an Amish perspective and also tackles cultural traditions that were criticized in the wake of the 2011 accident, primarily the practice of having young children driving carts and handling animals on busy roads.

“The mindset that an 8-year-old can handle the reigns of a horse when we know that sometimes it’s bad enough for a man to handle,” Sheriff Rogers explained.  “It’s a bit unreasonable.”

In the weeks following the accident in 2011 state lawmakers and Sheriff Rogers met with Amish leaders to discuss what could be done to improve safety.  Though some in the community pushed for laws regulating buggy driving many, including Rogers, said that was an extreme option.

“We have enough laws on the books the way it is,” Rogers explained.  “I think that, in deference to the Amish, it is just one of those things that we want to partner with them to educate their people and they know the risks, they know the hazards, they want to help in this endeavor, they don’t want to see their children killed.”

Car drivers are also encouraged to read the book to understand why and how the Amish drive their buggies.

The manuals are free of charge and are being distributed through Amish churches across Elkhart and LaGrange Counties.  They can also be picked up at the Elkhart County Sheriff’s Department.