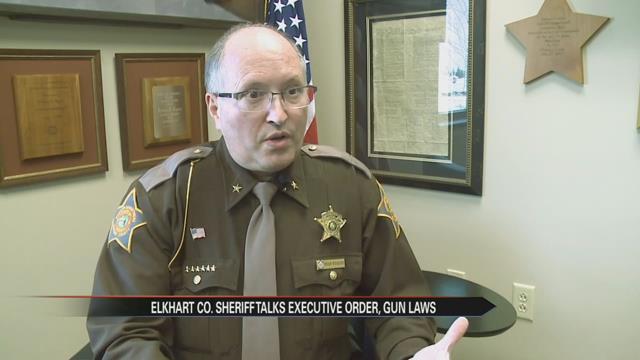 On Wednesday Elkhart County Sheriff Brad Rogers talked about the state lawmakers pushing to expand access to firearms and if federal efforts could change things in Michiana.

“Everything that he has tried to do here in the last couple of days would not have any impact on any mass murder that has happened in our nation,” says Rodgers as he refers to President Obama's executive order announced on Tuesday.

“If we want to make an impact on reducing violence then how about we repeal some of the unconstitutional gun laws and make it more free for people to carry guns,” says Rogers.

On Tuesday State lawmakers discussed this once again. Some proposing legislation that would make it easier to get firearms.

“That’s how people can make an impact. Have an impact on their own safety because quite frankly the police cannot be everywhere and empowering the people basically to protect themselves,” says Rogers.

The first measure proposed by the General Assembly is getting rid of Indiana’s licensing requirement to carry a handgun. This means almost anyone could carry a gun except a felon.

Guns in typically gun-free zones like schools is a proposal Rogers has been behind for some time.

“That doesn’t mean everybody is carrying a gun but if we have just a few highly trained selected staff, that could be difference between a large body count and neutralizing the threat early,” says Rogers.

Rogers say he isn’t necessarily pro-gun but he considers himself pro-constitution.

“There are some people that probably should’t be carrying guns there are people who have a distaste for the thought of carrying guns and I defend their right,” says Rogers.

The proposals made yesterday in the State House are preliminary.

Rogers adds that the executive order announced by the President does not really include his department’s scope of power.