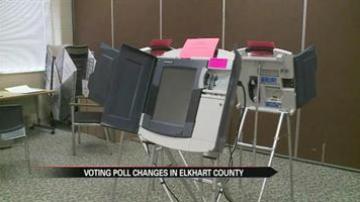 ELKHART COUNTY, Ind. -- On Tuesday, Indiana and Michigan residents will head to the polls for the primary election. Board of Election members are very busy preparing ballots and poll locations, especially in Elkhart County where they're using vote centers for the first time.

The vote centers are expected to be more convenient for voters and more cost-efficient for the county.

Ronald and Annie Douglas have lived in Elkhart their entire lives and they have voted in many elections.

Often they would struggle to rush home from work to go to the polls in their precinct on Election Day.

On Tuesday, for the first time in Elkhart County's history, they won't be limited to one polling location.

"It'll allow people to go vote at any location and not just at the precinct in their local neighborhood," said Wayne Kramer, Elkhart County Board of Elections Chair.

There are 25 vote centers in Elkhart County - placed in different areas by the Board of Elections based on convenience and population.

"They're located in the major metropolitan areas as well as our surrounding communities of Nappanee, Bristol and Millersburg and Middlebury," said Kramer.

Kramer says at least two years of research went into the decision to switch to vote centers.

Although county officials are confident there will be no issues for voters on Tuesday, they say they plan to stay flexible.

"If we think in the first go round in the primary election that we need a vote center somewhere else, we have the ability to do that, we could relocate one if we needed to," said Kramer.

Kramer says previously there were more than 80 polling locations throughout the county. The reduction to just 25 will save the county money on equipment and staff.

"That gives the county a tremendous savings in terms of human costs, in terms of the cost of running the election," said Kramer.