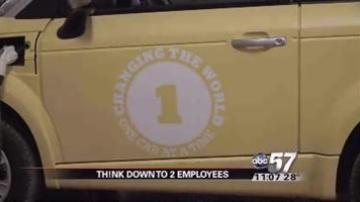 ELKHART, Ind.-- An Elkhart company is fighting to stay afloat despite promising to bring 400 to 500 jobs to the Elkhart community.

Think opened in Elkhart in 2010, bringing the automobile of the future to a faltering economy.

"Originally the company got started by selling to fleets," said Rodney Smith, one of the two employees remaining at the Elkhart location. "We're still doing that."

Smith was hired in November 2010 and at its' peak, Think had a total of 25 employees in the Elkhart location, he said the company let about half of their staff go on Jan 1, 2011.

The site was meant to be a manufacturing facility. Think intended to build an entire assembly line with conveyor belts and mass production of the electric cars.

"Well it was very exciting when Think decided to locate here," said Kyle Hannon of the Elkhart Chamber of Commerce. "We’ve been involved in transportation industries for awhile, but here’s the new thing. It’s cutting edge. electric cars and they were going to be built right here in Elkhart and everyone was excited about that."

But shortly after the company let go of half their staff, the parent company, Think Global, filed for bankruptcy-eliminating most of the rest of their staff.

Meanwhile, Smith is responsible for taking care of the remaining cars and fixing up the unfinished ones.

"Right now, in the shut down state that we’re in, we’re here maintaining the facility and continuing to process cars as time goes along," said Smith.

The company currently has about 120 cars ready to drive off the lot to the next person who wants to buy and they have another 30 that are still waiting for parts to arrive before they, too, are ready to be sold.

"We’ve just been downgrading since then,” said Smith. " Think Global went into bankruptcy and we have a new owner. So they’re over in Europe trying to get things arraigned over there."