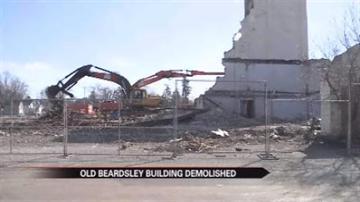 ELKHART, Ind. -- A building off Beardsley Avenue that was an electric car company, a store and the Walter Piano Factory is gone. What was left of the building was torn down by heavy equipment Friday. Nearby residents are happy it’s finally gone.

Senne has lived in the neighborhood around Beardsley Avenue for 9 years.

She watched the building cause problem after problem.

“There've been squatters and scrappers coming in and out of the building and really it has contributed to the blighting of the neighborhood and it has been a safety and health hazard for a number years,” said Senne.

The final blow came last summer when a fire ripped through a large section of the building.

That accelerated efforts by the city to take possession of the building and bring it down.

“The most recent owner let it go back on tax sale so the county took possession of it via them not paying their taxes and we were able to work with the county,” said Barkley Garrett, Economic Development Elkhart.

Garret was on hand to watch the building go down.

“This building has been here some time. It's been an eyesore for some time. The city has been working diligently for the last couple of years to take possession of it and get it to this point,” said Garrett.

In its prime, the building was leased by Walter Piano.

Walter Piano eventually moved to its new location over on County Road 6 and the building started to deteriorate.

But getting rid of it wasn't easy.

It took efforts by the county, city and neighbors. They had to write letters to get the grants that paid for the demolition.

The city hopes a high tech business will eventually take the building's place -- but in the immediate future it will be green space.

Space that will give people in the area hope.

“We're really excited about the neighborhood and some positive things that could happen,” said Senne.

The neighborhood association is having a meeting next Tuesday at 6 at St. Paul's United Methodist Church.

During the meeting, they’re asking neighbors to talk about what they would like to see in the building's place.