Elkhart families in need get winter coats at event 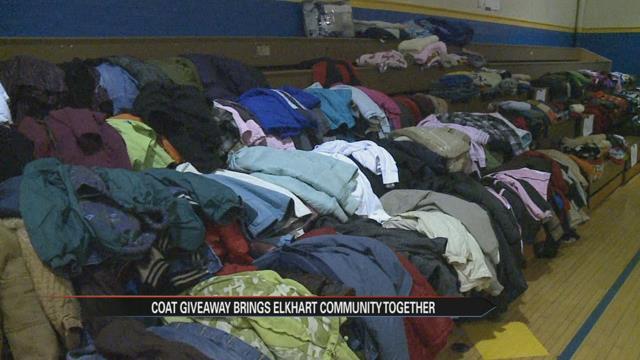 Hundreds of Elkhart families in need now have winter coats after a successful event at the Roosevelt Center on Sunday.

“I got a Winnie the Pooh coat!” Elkhart resident Kathy Skinner said.

“We got a couple sweaters, some coats and a lot of good greetings,” Elkhart resident Teha Rowland said.

Skinner and Rowland joined more than 250 Elkhart residents who lined up inside the Roosevelt Center Sunday afternoon to get their pick at more than 500 winter coats donated from the community.

“It means a lot,” Rowland said. “It means that the city care. They care about their citizens.”

Rowland and her young daughter stopped by after hearing about the event at the local homeless shelter where they were eating breakfast.

And Skinner, who was one of the first in line, said her new coat isn’t the only thing that will keep her warm.

The event was put together by South Side Inc.’s volunteer network and LaCasa Inc., along with a number of local businesses.

What started as a coat drive quickly grew into something much larger.

“Some people said that, ‘We’ve got some other cold weather items we’d like to give you,’ so we took those, and then it snowballs, as it does every year,” LaCasa Community Organizer Jason Moreno said.

And this year, the second annual coat giveaway included everything from blankets to jackets, hygiene kits, and a holiday meal.

“We just put through 255 people in 47 minutes,” Moreno said, at the event. “This is the best part of my job – when you actually get to see the fruition of all the work and all the volunteerism that happens here!”

Moreno said though the coat giveaway is over, he encourages everyone in the Elkhart community to keep donating items.

He said the Shepherd’s Cove – where this story was put together on Saturday – is the best place to drop donations off.