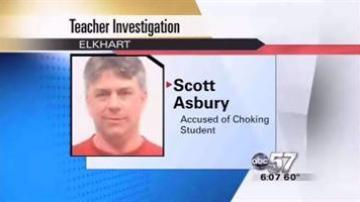 ELKHART, Ind. -- An Elkhart gym teacher is being investigated for choking a student.

A 13-year-old Northside Middle Schooler claimed he was attacked by teacher Scott Asbury.

The teen claims Asbury choked him and pushed him up against some lockers after he and some friends were caught crawling in the gym rafters.

We called the district Thursday afternoon.

Here's what the school had to say:

"I can tell you we are aware of the incident that took place at nrothside and we are in the middle of the investigation."

We did some digging and found that Asbury has a criminal past.

In 2010, he was arrested and charged with drunk driving and marijuana possession.