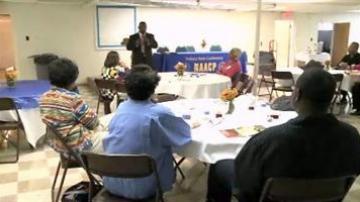 ELKHART, Ind. -- Indiana members of the NAACP are in Elkhart this weekend for their state conference. It is the first time in nearly 20 years it will be held in Elkhart.

The four day convention will be held Thursday through Sunday at the Canaan Baptist Church on Fieldhouse Avenue.

More than a hundred representatives from the 26 local branches of the NAACP are expected to attend the conference.

"Since I was a little girl I've felt interested in civil rights and felt that that's something that's very important, that our nation will never go very far without everyone having the same opportunities,” said Shari Mellin, a member of the Elkhart branch of the NAACP.

Members will attend workshops that teach how to advance the fight for equality in their home areas.

"Rights are being challenged on every hand; things that we thought were very secure such as voting. You know no body would think that in 2012 we would have to go back and protect that right that we won,” said Barbara Bolling, Indiana State President of the NAACP.

The battle against voter suppression has brought the man who works with all the major political players in Washington DC to town.

Hilary Shelton, the director of the NAACP's Washington DC bureau says Indiana has one of the most active state conferences and that helps advance the organization’s objectives as a whole.

"One of the training things going on here at this state conference is to train our people to be non-partisan election observers. To watch what is going on, if they see something happening that's problematic, to report it. And to make sure we can make sure again, as every American casts that vote, on this crucially important election, that those votes are counted,” said Shelton.