Elkhart Knights of Columbus filling boxes for 400 families in need 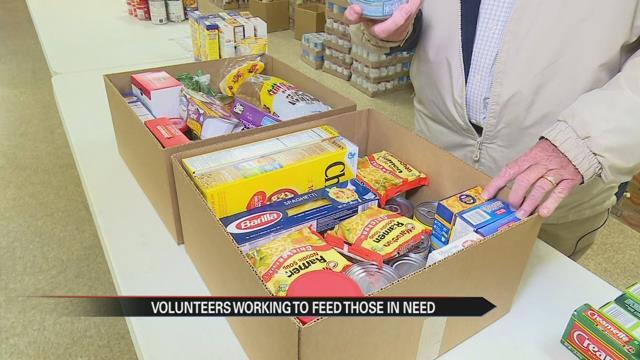 For the 32nd year, the Elkhart Knights of Columbus are filling boxes with food for families in need. They plan to deliver them to 400 families Saturday.

“You know, there’s just this feeling whenever you do something good for other people,” said Elkhart Boy Scout, Joshua Whitehead.

“We deliver two baskets of food or two boxes of food this year to 384 families who are a little bit less fortunate than a lot of us,” said Deputy Grand Knight Richard Scheve.

“It makes me feel good, because I get to help them and then them have a chance to be helped,” said Alondra Soto, who’s both a volunteer and recipient.

11-year-old Alondra Soto’s own family will be helped by these donations. Her baby brother is sick in the hospital, which makes the holidays even tougher on her family.

“I get to help him out by giving all of this to charity, and he’s in need right now,” said Soto.

“This really helps out, if not in a huge way, but certainly gives them some food so that they have some food on their table during the holiday,” said an Elkhart Boy Scout leader, Jeffrey Fullhart.

“They get two boxes of cereal. They get five cans of vegetables. You can see we have spaghetti, macaroni, we have tuna fish…and each recipient gets both of these boxes, okay, so, and that’s what we’re here tonight for,” said Scheve.

By the end of the night, nearly 800 boxes will be filled with about two weeks-worth of meals to be delivered to families in need throughout Elkhart.

“We’re blessed with things that other families don’t have, so it’s important to give them the opportunity to have these things,” said volunteer Klairece Grost.

“The closest word I can describe it to you would just be pure joy,” said boy scout Joshua Whitehead.

The Knights of Columbus will be delivering 22,000 pounds of food Saturday in about 800 boxes.