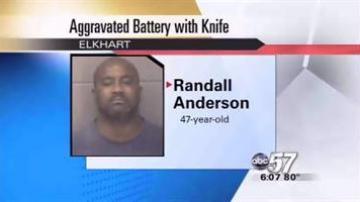 ELKHART, Ind. -- An Elkhart man is locked up after police said he stabbed one of his co-workers.

It happened around 9:45 a.m. on Friday at Chester Court.

Randall Anderson is charged with aggravated battery with a knife.

Police believe he stabbed Bryan Vargas during an argument at work.

Vargas was rushed to Elkhart General with serious cuts to his arm, but he is expected to be alright.