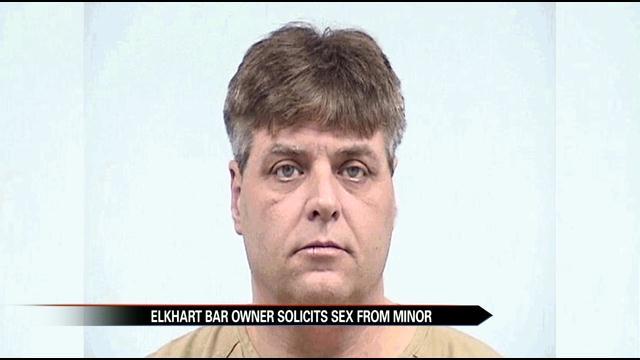 Police say a former Elkhart bar owner fondled a 15-year-old he met on a cell phone app. Days later police conducted an undercover sting and say he met  up with an r detective.

John Klawiter, 46, was arrested for one count of sexual misconduct and two counts of child solicitation.

On January 9, 2015 while he was still part owner of RJ's Pub in Elkhart, police say he brought a 15-year-old boy to the bar and molested him. This initiated police's sting operation.

Regulars at RJ's Pub are surprised this was the man that served their drinks.

“John always struck me as a very nice person, very fair. He seems to help people a lot and I wouldn't think he ever done something like this,” says Bill Block a patron at RJ's Pub.

Block knew Klawiter and still can't believe he faces allegations of soliciting sex from a minor.

Block says, “I was shocked!”

“Nobody really knows what anybody does. Does anyone even really know their neighbors anymore?” asks Bennett.

Police say Klawiter met the 15-year-old boy on a cell phone app just weeks ago, fondled and molested him on their way to RJ's Pub.

Weeks later the boy identified him in a line up and police set up a sting to trap Klawiter in the act using the same cell phone app with a fake profile.

Although this is surprising news to some they still feel like everyone deserves a fair shot in court.

The Elkhart County Prosecutor's Office say court dates will be available at a later time. As of January 27 Klawiter is no longer listed as an inmate at Elkhart County Jail.
Share this article: