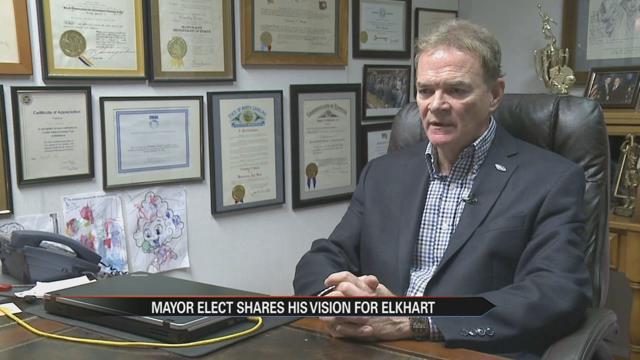 In less than three weeks a new man will lead the city of Elkhart. Mayor elect Tim Neese wants to hit the ground running.

“Ya know you wake up you know what you didn’t get done the day before and that’s on your list of things to do plus what you still have to do,” says Neese.

Neese is not officially mayor until January 1st 2016 but he has already started his to-do list.

“We do have some vacancies that I want to be very aggressive in filling those vacancies as soon as we have them within the Police Department,” says Neese.

Neese says his top priority is public safety. One of his first changes to the current administration was naming a new Police Chief Ed Windbigler.

Next he wants to fill 11 officer positions that are open at the Elkhart Police Department.

Neese says this type of shortage creates a morale issue that doesn’t allow the department to serve the community the best it can.

“I’m going to have a very defined comprehensive recruiting system so when we have a vacancy we don’t have to go out and find people we already will have them ready,” says Neese.

Neese says having a fully staffed police department will allow for officers to get out of their cars and interact more with the community.

“When a police officer is communicating one on one you are going to see a relationship improve with the police and the neighborhood and there is going to be a trust that develops,” says Neese.

Neese wants that type of trust to exist between city hall and the citizens of Elkhart.

“I don’t want people to feel intimidated by city hall. If there is something that can be done differently to make their visit or a process better or more accommodating or streamlined then I want to hear about it,” says Neese.

Economic changes are in the works as well but Neese says one of Elkhart’s key industry will stick around.

“I have exchanged voice mails with a manufacturer of motorcycles to come here as a bit of a change from the recreational vehicle industry. But we don’t want to lose sight of how important and vital that they have been and remain crucial to community’s economic future,” says Neese.

Other items on Neese’s to-do list include resolving annexation issues and making sure the street department is prepared with functioning equipment for when it snows.