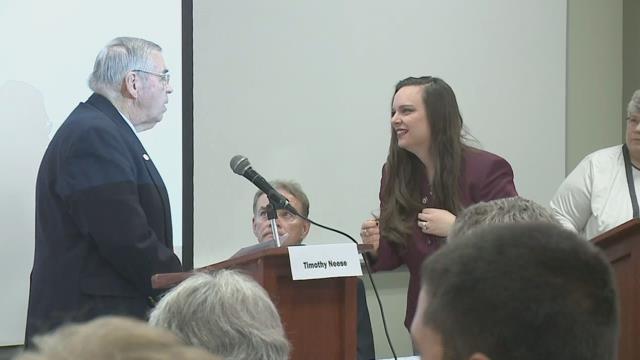 On Thursday, during a mayoral candidate debate in Elkhart new ideas were put on the table as a current administration defended the status quo.

Close to 100 seats filled a room at IUSB Elkhart Center. Every single seat was taken and a group of about 25 stood against the perimeter of the room waiting to hear the candidates speak.

The night began with a coin toss indicating Republican mayoral candidate Tim Neese to start with his opening statement.

“We need a new start in Elkhart,” says Neese.

“We need to bring people back to Elkhart we need our kids to stay in Elkhart,” says Moore.

After initial statements were made the debate began.  The crowd provided the questions and with a full room, different city issues were proposed. One of the first topics was downtown Elkhart.

“To have a vibrant city then we need to set the example in the hub which is the downtown area,” says Neese.

Neese says new shops and more residents living downtown is on his to do list, while Moore says it is already being done.

“We’ve made it so very nice so we are still going. We are doing the very things Mr. Neese advocates doing and we will continue to do that,” says Moore.

From the discussion of downtown came questions of safety and how an administration would be able to afford additional police officers that some citizens say are needed.

“Public safety is number one priority for me but when you talk about reinforcing that department we will do that. We have already added five, and will probably add three during budget time,” says Moore.

Neese says he feels he could do the same without breaking the budget.

“Maybe there is a uniform officer working an administration capacity that maybe we could put out on the streets. It’s not about the amount of police officers its more how you utilize them ,” explains Neese.

The debate lasted an hour and half and covered many more issues like annexation, city employees, and blighted homes.

To watch a full debate the next one will be at Memorial High School on October 14th, at 7 p.m.