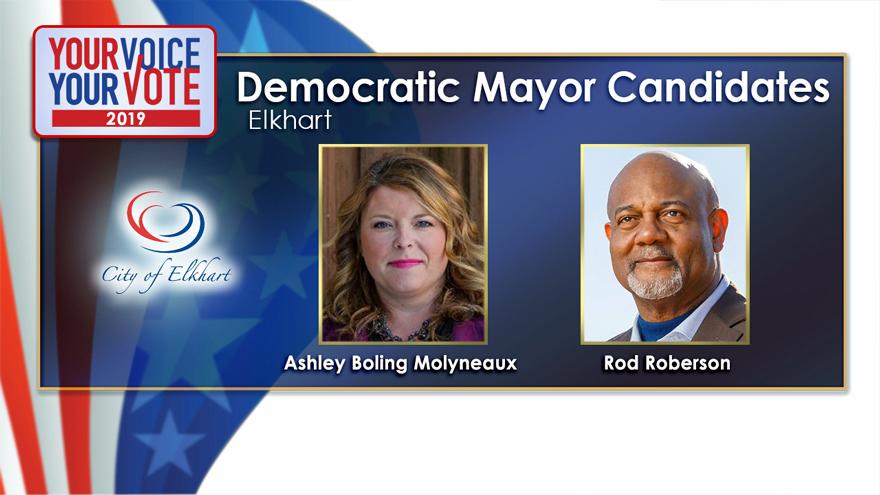 ELKHART, Ind. -- Former city council member Rod Roberson and the head of the Elkhart Education Foundation Ashley Boling Molyneaux are running to be the democratic candidate for mayor.

Both candidates are hoping to replace Mayor Tim Neese, who is not seeking re-election.

Boling-Molyneaux says that her love for the City of Elkhart is what is motivating her to run.

As an educator and product of Elkhart Community Schools, she says she’d like to see the community and schools collaborate.

Boling-Molineaux says that education is also important to the community as 76 percent say it is a number one concern in Elkhart.

When it comes to public safety, she says the community’s trust in the police department needs to be rebuilt through positive interaction.

Boling Molyneaux says the future of the city has to be a place where people want to live, not just work.

She says she’d like to create a sense of community through place-making.

At 38 years old, the mayoral candidate says her age is not a liability.

"People think that age is somehow synonymous with experience.  But I will tell you what.  I have the experience of getting results for my community,” said Boling Molyneaux. “I'm like a dog with a bone.  You give me a goal and it will be met way ahead of time.  So, that's what I want to give to my community - my limitless energy, my passion, my excitement and the fact that I want to build an Elkhart that's right for my children and that's right for everybody's children, cause that's what they deserve."

Rod Roberson says the people of Elkhart need to feel connected; so he’s running as a unifier.

Roberson also says that one of the top issues in the community is the police department. He says that credibility and trust needs to be brought back into relationships with residents.

He also says it is a problem that certain neighborhoods don’t feel connected to the development going on in the city.

Roberson believes the Tolson Center needs to be reimagined, similar to what’s happening with the Aquatic Center and River District.

He says Tolson can be an anchor to community revitalization.

The mayoral candidate says his years of experience in leadership positions would be an asset to his administration.

"I don't want people to feel as though the services we will provide are disconnected to the relationship they should have inside of the city.  All of my departments will have a culture of service and in that, we'll be able to bring, I believe, the right type of relationships to our constituency and with that, I believe they will be not just connected to the future, but building and driving our own future together,” Roberson said. “It’s my job to make sure this administration is as transparent and as accountable as it can constantly be, and I believe that if people are connected that way, they'll hold us accountable and be more than happy to make sure that we are adjusting and moving with what they would like for us to be. I think our city is just at a place where it can accept that kind of leadership, I’ll be right there doing it."

The winner of the primary will face former mayor Dave Miller in November. He is the only republican in the race.

You can learn more about each candidate by clicking these links: