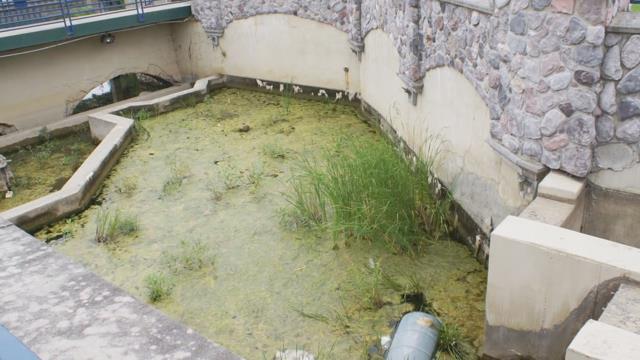 Elkhart mayoral elections are less than three months away and one hopeful is stepping up and calling for the current administration to use tax payer dollars more wisely.

Republican mayoral candidate Tim Neese says he is frustrated by how Nibco park typically looks. He adds that the presence of dried up fall leaves are proof that not much has been done over the seasons.

“The appearance of the trash would have been a movie producer’s dream come true that specializes in horror flicks," says Neese.

Neese jokes but says an algae caked stream is a serious problem.

“Riverwalk is a quality of life issue for the citizens of Elkhart but the issue is its lack of quality," says Neese.

On Tuesday, Neese shined a light on the scummy waters, neglected guard rails, and littered landscape.

Within 24 hours, the city had crews trimming landscape and cleaning the park.

Nibco park's appearance from Tuesday to Wednesday is like comparing night and day.

This is a job that Elkhart resident Gloria Sura Taylor can also appreciate.

"This is like a little getaway I can just be by myself and enjoy the sound of nature," says Taylor.

Taylor walks along this river every day and says she see often sees at least one city worker.

“I either see somebody cutting the grass or doing weeding," says Taylor.

Neese argues the state of the park just hours ago does not match up with consistent maintenance.

“It’s going to cost far less to keep this presentable on a regular basis than play catch up," says Neese.

Mayor Dick Moore stated Mr. Neese’s lack of experience in managing anything remotely like a City can't be disguised by walking the City and pointing out every weed. As far as the Riverwalk is concerned, if Neese had his way there would be no Riverwalk. When on the City Council Neese didn't support the construction of the Riverwalk. Point in fact he voted against the Riverwalk not once but twice. The voters won't be fooled by Neese's usual campaign rhetoric. If he had done his homework he would understand that work release are kept busy by the county and are not always available. We have a volunteer group who had asked to perform this project. And so we wait for them to help. Near record rain fall this year has tasked City resources as well. And not too long ago a storm came down on Elkhart. It produced more damage than any other in a long time. It took down trees, threw a lot of dirt around and gave us tons of brush to pick up. Did that means many things would not be done? Absolutely. Let's not forget Neese never offered any meaningful solution while in the State Legislature to replace the $12 million dollars in property tax revenue. The City Buildings and Grounds Department care for nearly all City properties. With just 25 full time and some short term seasonal workers they do a great job every day. The Mayor would like to publicly thank INOVA Federal Credit Union for volunteering a workday to help with the Riverwalk maintenance. It's not a new idea but it's a very welcome one that has been accepted by our administration as well as others. We will continue to do everything we can to make this City a great place to live, work and play.