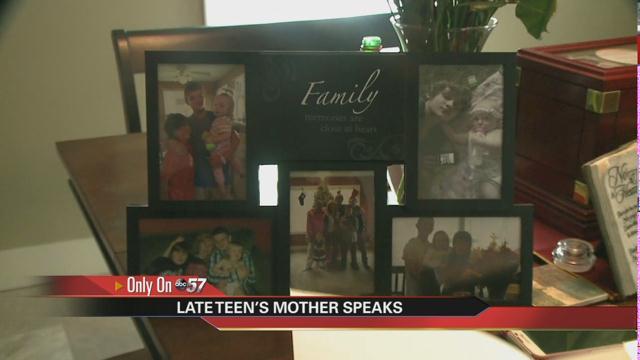 Rather than celebration, one Elkhart mother now mourns a loss each Mother's Day. ABC 57 spent the day with that mother as she continues to cope with the loss of her son.

"If you were not coming today I don't think I would have gotten out of bed. It's a real struggle to go out every day to just go on with one less child," mother of 16-year-old Devin Borkowski, Michelle Frost said.

Borkowski was found dead inside an abandoned home in March 2015.

"I have four beautiful children and one is no longer here. I do everything that I need to do and most of the time I do it with tears in my eyes. I work that way, grocery shop that way, it's a very big emptiness, it's a void it hurts," Borkowski said.

"I mean he was a pretty good kid. He was happy, go lucky, he had a big heart. He loved so much sometimes I think his heart was too big for his body if you will," Frost said.

However, as Devin got older he became troubled, hanging out with the wrong crowd at abandoned houses.

"That house that they found my baby in, I'm having a really hard time with the existence of that house," Frost said.

But as Frost told ABC 57, the lack of programs for troubled teens and runaways in Elkhart bothers her even more.

"What I've been finding through talking to the kids some of these kids are reaching out because they are messaging me and asking me you know and some of them even call me mom now. But I am not a social worker. I don't have training to help. I wish I did. Maybe I could have helped my boy. I did my best but the circumstances you know what happened. I can't take it back. I can't change it but I don't want to see it happen again," Frost said.