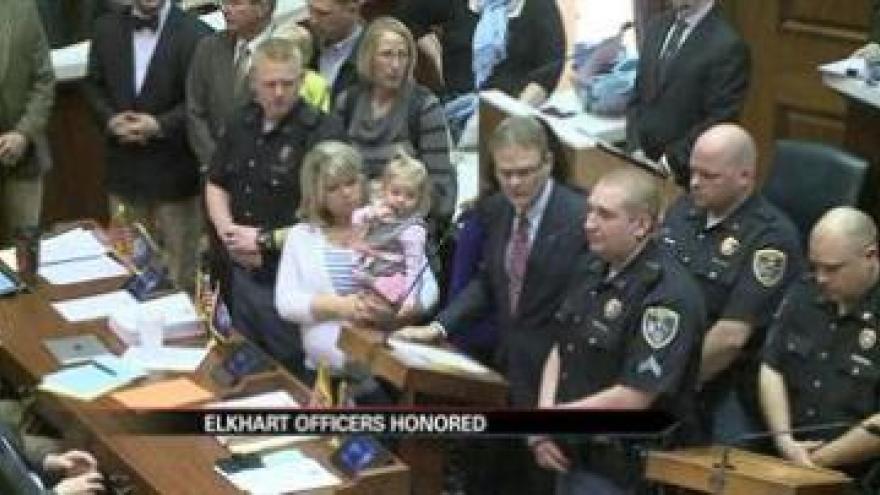 INDIANAPOLIS -- The two Elkhart Police officers who ended a shooting spree at the Martin's Super Market were honored by state lawmakers and the governor in Indianapolis Wednesday morning. Cody Skipper and Jason Tripp spoke publicly for the first time since the shooting on January 15.

Their story gives new meaning to the term 'brothers in blue.'

"My partner Jason Tripp and I we were just doing our jobs honestly," said Skipper.

By the time they arrived to the Martin's that night, two people, customer Rachelle Godfread and employee Krystle Dikes, were already dead.

The alleged shooter Shawn Bair had a hostage held at gunpoint.

The officers shot and killed Bair.

"Had it not been for the quick action of Cody and Jason, more lives could have been lost, unfortunately there were two," said Representative Tim Neese during the ceremony.

They stood with their families in front of the chamber while being honored.

The officers spoke after the ceremony.

We asked them what it was like when they got home that night and hugged their wives and children.

"You know it was… I just know that she wanted to see me," said Skipper. "Knowing that I could be back with her and knowing that I was ok. I was just wanting to be there for her."

"It was one of the happiest moments of my life. I remember walking in the door and he was supposed to be asleep but he wasn't because of everything that was going on. And I just picked him up and hugged him and I didn't want to let go," said Tripp.

Both of the officers' children were more interested in the governor's carpet, unaware their fathers put their lives on the line every day.

"I told both the officers and their wives this was an award and recognition for their family," said Governor Mike Pence.

A risk they both say they are eager to take again soon for the Elkhart community.

"I just know that God has me in this job for a reason and he gives me the power to do my job," said Skipper.

They will be back on the job as soon as the Indiana State Police complete their investigation into the shooting. It is expected to be complete soon.

The two victims, Rachelle Godfread and Krystle Dikes, were also honored with a moment of silence.