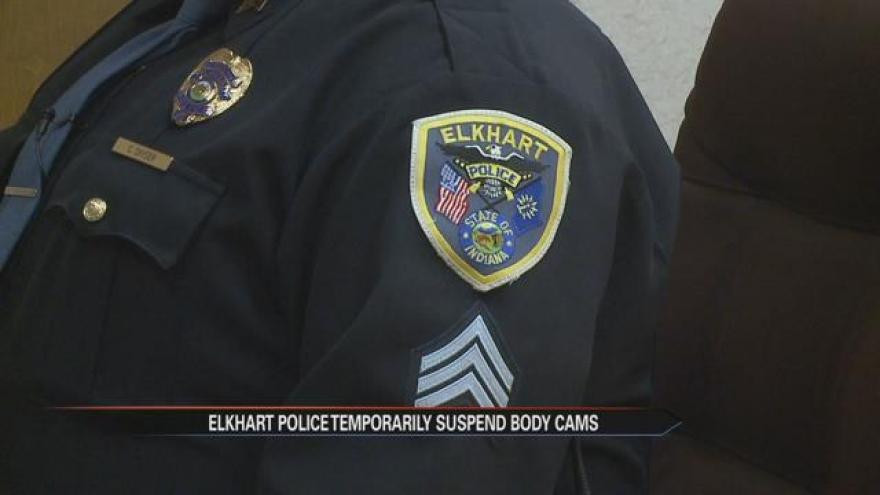 Body cameras no longer in use for officers working at the Elkhart Police Department. ABC57 first told you, back in December, body cameras in both the city of Elkhart and Elkhart County were experiencing similar malfunctions, like loss of connectivity.

On Monday morning, Mayor Tim Neese along with the Elkhart Police Department decided to temporarily suspend all usage of their body cameras.Mayor Neese sent out a letter in which he says it’s in the best interest of all to take this decision. Sergeant Chris Snyder agreed by saying this is the best decision given Elkhart’s circumstances.

“The amount of considerable inconsistency,” said Mayor Neese. “We have at least 25% of them not working and that means they’re at the manufacturer. That often takes a minimum of a week to mail and to have them repaired and returned.”

Mayor Tim Neese confirmed that after 3 p.m. on Monday, all usage of Elkhart Police Department’s body cameras will be suspended, at least temporarily.

“I just did not think this was good public policy in the interests of public safety to have a vest cam that was not consistently working,” said Mayor Neese.

Like I first reported on December 12th of last year, these body cameras manufactured by Digital Ally have caused  similar issues for other agencies, including the Elkhart County Sheriff’s Department.

But the county will keep them on deputies. Late Monday afternoon, Capt. Jim Bradberry released a statement that said in part, “The Elkhart County Sheriff’s Department considers the body camera to be a valuable resource and the benefits to having them outweigh an occasional breakdown in this device.  The Sheriff’s Department will continue to use them and does not have any foreseeable plans to terminate their use by officers.”

But Mayor Neese says he doesn’t want to take any chances. “It is false security because there have been times that an officer will leave the police department and then have that vest cam working and then within a matter of minutes or longer, it’s not functioning.”

Elkhart City Police say their consistent malfunctions are likely due to daily usage.

“We thought we were getting a good quality product and I think just as time has gone on the wear and tear of putting it in your pocket putting it on and off put a toll much quicker than what we thought it would,” said Sgt. Snyder.

Both Sgt. Snyder and Mayor Neese explained why they took this decision now.

“We want to make sure that we don’t jump into something, but we also don’t want to wait too long that it creates other problems. This was the right time to do it,” said Sgt. Snyder.

"The malfunctioning was continuing. We did not want to have a false sense of security for both the police officer as well as the public. It’s a matter of being consistent,” added Mayor Neese.