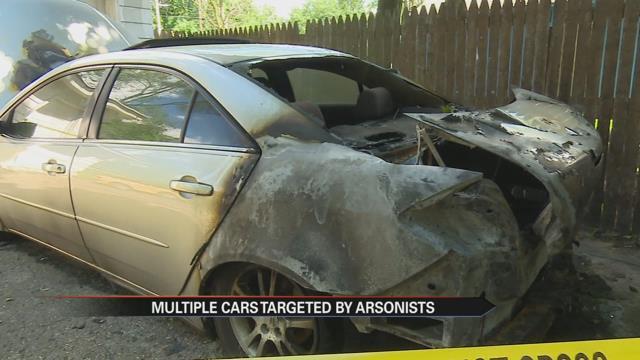 A series of arsons in Elkhart has left three drivers with damaged or totaled vehicles as police investigate.

It was just after 1 o’clock Friday morning when cars parked on Frances Ave., West Wolf Ave. and Decamp Ave. in Elkhart were set on fire.

Yarbro lives across the street from the car that burned on Decamp Ave.

He called 9-1-1 after his fiancé noticed the flames.

“I was scared it was gonna blow up!” he said. “I was telling [my family] to get back in the house.”

Their quick action left only minor damage to the car on Decamp Ave., but the same cannot be said for the Pontiac parked in a driveway on West Wolf Ave. and a Chevy parked in a Frances Ave. driveway – both are total losses.

“Without having any evidence to link them together, we can’t say they’re connected, but just by looking at what was damaged, how it was damaged and the time frame, there’s a very high probability that, in some way, these are all gonna be linked together,” Sgt. Snyder said.

Sgt. Snyder also said it’s likely gasoline was poured on each vehicle before they were set on fire.

Yarbro thinks he saw two suspects drive away after settling the fire on Decamp Ave. – something he said he’s never seen in his neighborhood before.

“I’ve seen windows get busted, I’ve seen tires getting drilled out with a power drill, but I’ve never seen nobody set no car on fire,” Yarbro said.

Sgt. Snyder said there were only eight cases of arson in Elkhart between January and July of 2016 before these three incidents.

The owner of the car on Frances Ave. said, off camera, that she thinks she and her family were targeted because the owners of all three cars are cousins.