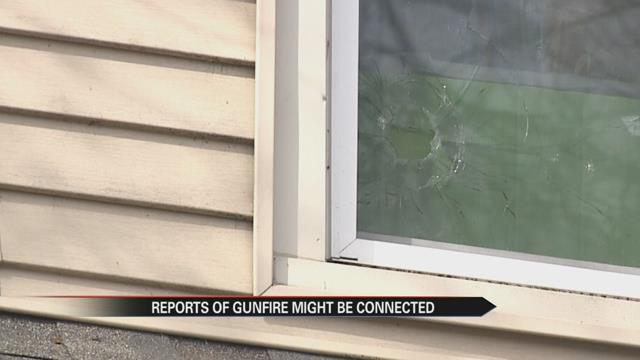 Three reports of gun fire in about an hour leave several families in Elkhart shaken up. No one was injured but the search continues for who fired the shots.

It all started on Franklin Street near Elkhart General Hospital.

Minutes later shots fired were reported a mile away on Blaine Avenue. At the last round of gun fire police found a stolen SUV half a mile away on West Garfield Avenue.

At this point in the investigation police they say it's too early to say that the three cases are definitely connected.

“How would it make you feel if your house got hit with a bullet hole and I have a two and half year old daughter,” exclaims Will Beam of Elkhart.

Beam is angry that for the first time in 49 years of owning this home on Franklin Street he was a victim of gun violence.

“I just heard four gun shots and then I went out back,” says Beam.

A stray bullet struck his second story window a little before 8:30 Monday night.

He wasn’t the only one with damaged property and stolen sense of security.

“I’m still you know nervous about the whole situation, not knowing who and why we were targeted,” says another homeowner house home was victim to Monday night’s shootings.

The woman who did not want to give her name owns a home on Blaine Avenue.

She is scared after seeing a bullet hole at the front of her home and another in her car’s windshield.

“It is kind of hectic you know when you have you know sounds of gun fire in one area and then within minutes in another area,” says Sergeant Chris Snyder with the Elkhart Police Department.

The second home hit is only about a four minute drive from the first home and those two shootings happened just minutes apart.

“The three of us were on the floor when the shooting was going on,” says the Blaine Avenue home owner.

Witnesses from the second scene say they didn’t see anything.

Beam says he saw a suspicious gold SUV on Franklin Street after his home was hit.

“We know that we recover a gold SUV that had been reported stolen earlier in the day on the last call that came in around 9:30 at night,” says Snyder.

One last call was made to Elkhart police on Garfield Avenue.

The stolen gold SUV jumped the curb and landed in a yard in the 500 block.

Neighbors called police and they found three bullet holes in the SUV.

“As the investigation goes on we will find out that it was probably something that happened and there was some type of retaliation,” says Snyder.

As investigators work to piece together the evidence, they ask if you have any information you contact the Elkhart Police Department.