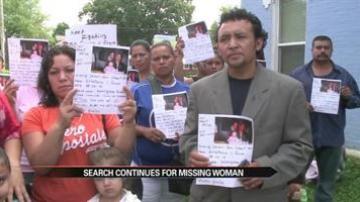 ELKHART, Ind. -- An Elkhart woman hasn't been seen since she left home to go to the grocery store last Tuesday, August 26. Police say they have reason to believe she isn't missing voluntarily.

Elkhart Police couldn't provide many details into the investigation of Anastasia Reyes' disappearance other than her van was found in Wakarusa. It had been set on fire.

Residents are passing out fliers hoping the 39-year-old returns safely.

"We are worried because she is the mother of two kids. And the husband is waiting on her too," said Delia Vazquez.

Reyes was last seen one week ago.

She went grocery shopping alone at the Kroger on Hively Street around 930 a.m. Tuesday, but never returned.

Community members say in recent weeks several Hispanic women have reported being approached by individuals while out grocery shopping.

Though they don't know if Reyes' disappearance is connected.

"We do have serious concerns because there have been numerous complaints recently of Hispanic women going to shop at Hispanic grocery stores and being accosted by individuals and being harassed and followed," said attorney Felipe Merino.

Reyes' safe return is also complicated by the fact that she doesn't speak English and is illiterate.

"Nobody knows where she is and her family is deeply concerned because her vehicle was found unattended in Wakarusa," said Merino.

Her van was found 12 miles from where she was last seen.

Police suspect foul play because Reyes' Dodge Caravan had been set on fire.

Community members are now working harder than ever to try to find Reyes and bring her home to her husband and two young daughters.

"We are together because it's very important police put attention to this case," said Vazquez.