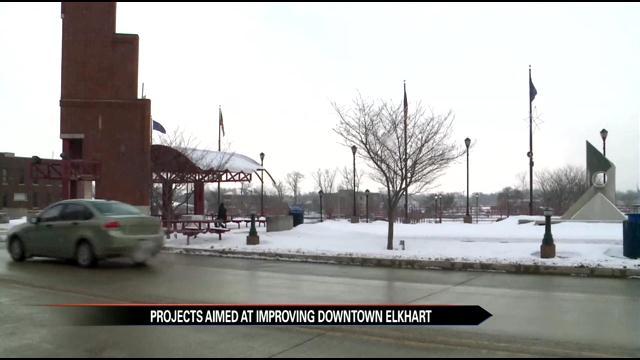 On February 17th a list of projects intended to improve downtown Elkhart was presented to the Elkhart Redevelopment Commission.

The commission didn't vote on any official action and members approved a list of projects that the Planning and Development Department wants to move forward.

The department is proposing $6 million in tax increment financing, or TIF, be used for redevelopments downtown including an upgrade to Civic Plaza, an improvement to the streetscape on south Main Street, a parking lot on north Second Street, and a project at the former Alick's drug store on east Jackson.

Some residents in Elkhart say downtown needs attention but what about other neighborhoods?

“I live downtown three blocks from here so it is literally my neighborhood,” says Steve Gruber part owner of Arts on Main in downtown Elkhart.

Gruber is from Elkhart and he has seen changes over the years.

“Well downtown has gotten a lot of attention and it is important to have a destination for people but I think there are a lot of Elkhartans (sic) who think what about my neighborhood?” explains Gruber.

When he heard of some of the projects proposed by the community development department Gruber was torn.

“I think that any city needs to take care of its center and take care of infrastructure throughout the city. I just had a few question marks about what the end game is for a few of those sites,” says Gruber.

One of the question marks Gruber directs to the council includes, “To look at every single project and make sure that it is really necessary and that it creates a wide benefit to Elkhart.”

“The funds can be used for what's called the downtown redevelopment area and it is explicit for those funds to be used in those areas only. They can't be used to support things like on the other side of town,” says Crystal Welsh, head of the community development department in Elkhart.

What about other neighborhoods that lack infrastructure

“We are looking to do some projects in the other areas as well like sidewalks along the south main street area in our consolidated South Elkhart TIF. So it's not like we are only focused on downtown. We have other TIFs that can do these public improvements in other areas in the town,” explains Welsh.

Gruber just hopes that these improvements that Welsh is referring to don't take too long.

“I don't want to be one of those who says absolutely everything should come downtown and have other neighborhoods looked over and be marked for future years,” says Gruber.

The official voting to issue a bond to fund the downtown TIF projects will start next month on March 10th. Announcements on other TIF projects have not been made.