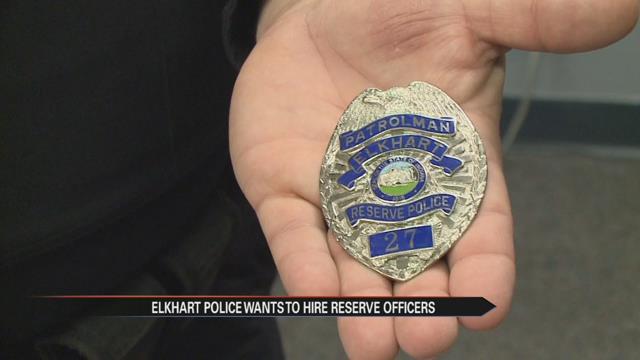 The upcoming New Year calls for new faces at the Elkhart Police Department. Thanks to the help of the new Chief of Police,  the Elkhart reserves program is officially coming back at the start of 2017.

Soon, there could be more help on the streets of Elkhart. Sergeant Chris Snyder says it seems like the department has had reserves for forever, but for years now, numbers have dwindled.

“We had some people that left and then the program didn’t pick back up. That was, like I said, 10 years ago. As people have left, they have just not been replaced,” he said.

Snyder says the big difference is Chief Ed Windbigler, who saw positive impacts coming from the reserve program in the past.

“He wanted to explore to see if we’d get some interest in it,” said Snyder.

The department hasn't started the application process, because the budget must be figured out.

“Obviously it’s not something that comes cheap and it’s not easy,” confirmed Snyder. “So we wanted to make sure that the counsel and the mayor were going to be on board.”

He said he didn’t know the exact amount of money being spent, but knows they’re ready to equip 10 reserves, with uniforms, badges and gear. “They felt like that was a manage number that would give us the resources to help us do what we want to do.”

Purchases for the gear and equipment could start after January 1st, after that Snyder says the program will start recruiting and added that this program benefits tax payers, because they would end up paying less for overtime.