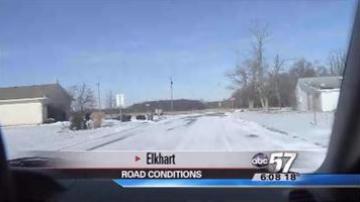 ELKHART, Ind.-- It's a terrifying feeling. You try to stop at an intersection, only to feel the car vibrate and hear the brakes grinding as the car struggles to come to a stop on glare ice.

Unfortunately, it's a feeling Michiana residents are all too familiar with.

"They say Michigan had more snow then us but the roads are way better here then in Elkhart? #booelkhart," tweeted Kat.

Daniel wrote, "Wow. I finally made it to work. Good job elkhart on plowing the roads for the working class heroes (both thumbs down..."

But Mindy had a different approach. She tweeted, "Why is everything in SB so awful this morning? roads and sidewalks are complete sheets of ice. elkhart was better, and that NEVER happens."

Despite, the poor conditions in the morning commute, most of the snow had melted or been cleared by afternoon, seemingly disproving the concerns.

After talking to several other Elkhart residents, it seemed as though the snow was not a hindrance at all.

"I think the roads are pretty decent. They do a pretty decent job around here," said James Johnson, a current Elkhart resident.

"I think they are being taken care of to the utmost, very best conditions. I think we're lucky,” said Mary Stewart, a lifelong Elkhart resident.

Interestingly enough, out of the 8 people we talked to in Elkhart, not one of them could say anything bad about the road conditions.

Stewart was the only one who could think of an issue.

"Sometimes, maybe in the county," said Stewart. "But I live on CR 16 and that's by the river and I think the humidity from the river my have something to do with that. So I'm just cautious when I drive and drive slowly."

Unfortunately we were unable to get in contact with the Elkhart County Highway department. But, we were able to talk to the St. Joseph County Highway department and they told us they have a priority list for roads to be cleared based on the traffic flow. Those roads with more traffic will be plowed first and those roads with less traffic, like cul-de-sacs, are lower priorities-- but they will be plowed!