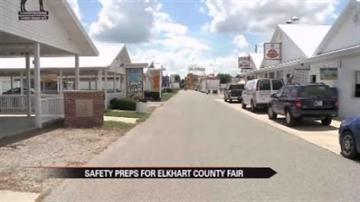 ELKHART COUNTY, Ind. -- Last week a LaPorte teen was arrested and charged with possessing an explosive device at the LaPorte County fair. After learning of that incident, we wanted to know if there would be security changes at the Elkhart County Fair, scheduled to open at the end of the week.

In Elkhart County, the tents are up, the vendors are preparing and the rides are ready to be assembled.

"We just make sure we do our research each year and see what the major concerns are. Current events do lend into that,” said Holmes.

Two separate tips led to the arrest of a teen who had an explosive device at the LaPorte County fair with intentions to set it off near a ride, according to deputies.

"Thank goodness for these two people that decided to come forward and report it,” said LaPorte County Sheriff Mike Mollenhauer.

He says they were lucky.

"Something, I am sure, tragic would have happened,” said Mollenhauer.

Holmes says he is confident they are ready for anything.

Holmes hopes people don't let what happened at the LaPorte County fair keep them from coming to Elkhart.

"This is going to be a safe fair; they are going to enjoy themselves; and if we have to deal with something, we are very prepared to do that,” said Holmes.