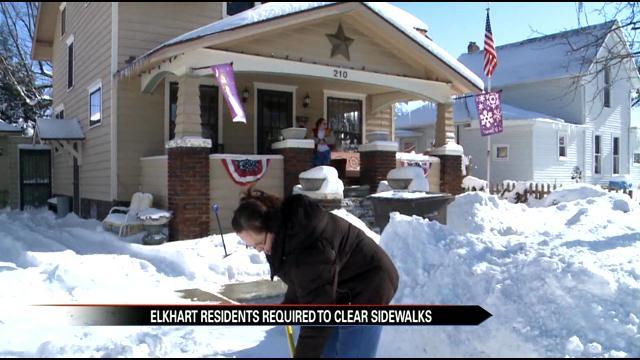 In Elkhart there is a task force focused on making sure sidewalks are cleared 24 hours after a big snow fall and if they aren't there will be financial consequences.

“If the sidewalks aren't shoveled you have to walk in the streets, in the road, and sometimes traffic, it can be bad!” said Nikayla Fulk, a sophomore at Elkhart Central High School.

Fulk is part of the reason the city of Elkhart has cracked down on keeping the sidewalks cleared after a big snow storm.

“We end up with a lot of kids walking to school in the Elkhart community area and what we don't want is kids walking on the streets,” said Dennis Correll, Building Commissioner for the city of Elkhart.

Correll says that in order to prevent this there is a task force that goes out 24 hours after the last snowfall to make sure sidewalks are cleared and if they aren't, residents are fined $25.

“I have a special needs child and she needs her walkway cleared to get to the bus,” says April Hunt an Elkhart resident.

To Hunt, it is very important that her neighbors shovel their sidewalks so her daughter doesn't end up in the street. But others think this rule is a little unfair.

“ Not so much for the elderly I can see give them a couple days but they are saying 24 hours after it stops and they want it all shoveled and stuff and not everybody can do it that day,” says Fred Collins, an Elkhart Resident.

Collins shovels snow for his elderly friends to help them avoid citations.

The city of Elkhart does offer a ‘Snow Hardship Waiver' from the sidewalk ordinance, but 86-year-old Sheri Myers says she applied and is still buried in snow.

“I applied about two weeks ago and haven't heard back,” says Myers.

Correll explains that Elkhart's Code Enforcement Division takes into consideration the weather forecast before they go out and start ticketing people.

This week the division will wait until Thursday, February 5 to begin surveying neighborhoods.