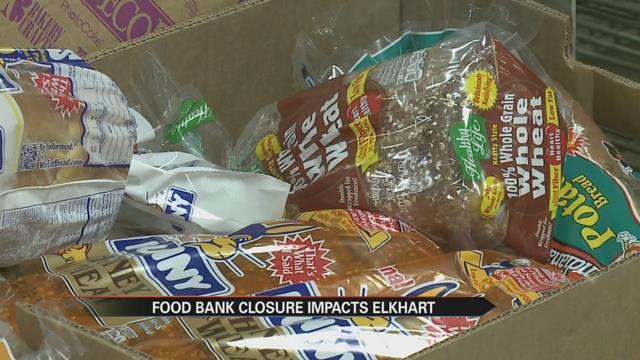 Three months after the Food Bank of Elkhart County closed its doors, those who relied on the services are feeling the aftermath. Since the Elkhart distribution center was closed local agencies have a few options. Some smaller soup kitchens and food pantries say it is not what it used to be.

Volunteers at Susanna’s Kitchen serve hot lunches Monday through Friday to many of the less fortunate in Elkhart.

Hyatte-Howie says she tries to provide a balanced meal for those who step down the serving line.

“I set up a salad bar every day,” says Hyatte-Howie.

“It’s a lot of miles and a lot more strain on us and it’s just very inconvenient,” explains Hyatte-Howie.

An inconvenience that she says sometimes is not worth it.

“I’ve been able to shop in the afternoon but by the time I get there most everything is gone,” says Hyatte Howie.

Marijo Martinec the Associate Director of the Food Bank of Northern Indiana explained the consolidation of the Elkhart Distribution Center with the Food Bank in South Bend. She says there are multiple options for the 30 plus agencies in Elkhart County.

“Now we are doing the distribution of the food in Elkhart. We offer the agencies there free delivery,” says Martinec.

Delivery is available from a long pre-determined grocery list. Hyatte Howie says sometimes it is missing an item.

“We have gotten very little meat from food bank so we are struggling there. We have been fortunate to have meat in our freezers but when it’s gone I’m not really sure what’s going to happen,” says Hyatte-Howie.

Martinec says the mobile food pantry is another option. It is a truck that brings both perishable and non-perishable items to Elkhart County once a month.

“We are looking at the beginning of the year to expand that because we know that people that need food assistance many times they never get enough food during one pantry visit,” says Martinec.

Starting in January Martinec says the plan is to increase the truck's visits to Elkhart County. A goal Hyatte-Howie is praying can be met.

“I always have faith and I always know that every time we are down God gives up what we need,” says Hyatte-Howie.