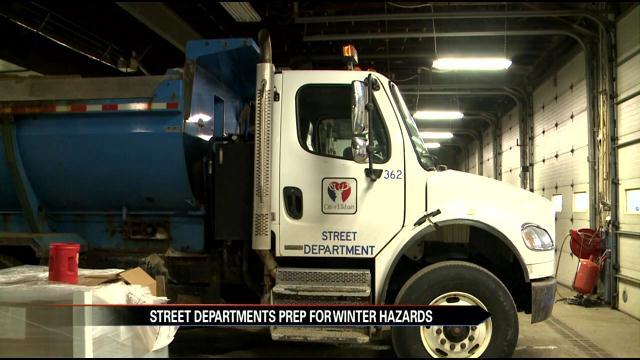 The Elkhart Street Department says it is ready for snow and freezing temperatures. It's nothing crews haven't seen before. On Wednesday night they are doing their part to prep the equipment they might need on Thursday. An auto shop in Elkhart says you can do your part to prep, too.

Cars and trucks easily passed down the roads Wednesday and Tony Creer, Chief Supervisor with the Elkhart Street Department, says they plan to keep it that way.

The street department is performing maintenance on over 20 salt and snow trucks and has a night crew ready to hit the roads as soon as the snow starts and the temperature drops.

Extreme weather is a part of Michiana winters but Rob Hoffer of Elkhart Auto Center says year after year he sees the same problems.

“We still see every year no matter how much it snows, you will see the neglect," said Hoffer.

“If you try to turn your windshield wiper on while it's still frozen you will see some damage right here in the arm where it will break,” said Hoffer.

In addition to ice issues you can't forget about dealing with the snow.

“If you are driving and do happen to get stuck, dig yourself out before you start rocking yourself back and forth. That's when the transmission can get hot and that's when the damage can occur,” says Hoffer.

In Elkhart County the Goshen Street Department says their crew doesn't expect to be hit by any extreme weather. Their plan is to take the night as it comes.