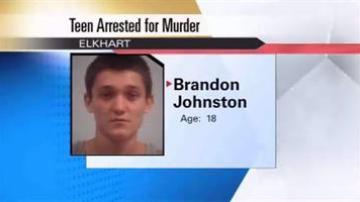 ELKHART, Ind. -- An Elkhart teen is locked up, accused of murdering a man three times his age.

18-year-old Brandon Johnson was arrested in connection to the murder of 69-year-old James Grant.

Grant, known by his family and friends as "T-Rex", was found stabbed to death in his home on Morton Ave. on Aug. 4.

Johnson is expect to appear in court on Thursday.