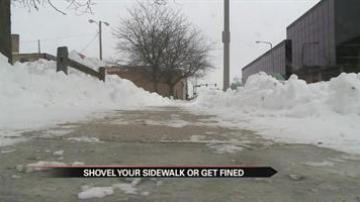 ELKHART, Ind. -- The city of Elkhart plans to start ticketing homeowners and businesses who have not shoveled their sidewalks on Friday. We wanted to know how strictly the ordinance would be enforced.

The ordinance requires there to be no more than two inches of snow on the sidewalk 24 hours after it stops snowing.

The snow may have stopped falling, but pedestrians in Elkhart continue to deal with slippery sidewalks.

That has forced people to walk in the street with cars.

"Kind of paranoid. You're just wondering is it going to hit me?" said Devonta Lemons.

"I know that the city has a lot of streets to take care of, but I think when there's a lot of traffic, it could be a little better," said Johnalisa Boardnax.

That's part of why the city of Elkhart plans on fining people who don't do their part to keep walkways clear.

Moore says if there's less than two inches on the sidewalk, they won't ticket.

They're enforcing the ordinance after suspending it this past week because of extremely cold temps.

"But that's moderated now. Our kids are walking back to school now and it's time we get the job done," said Moore.

Broadnax is mixed on whether or not fines should be issued.

She doesn't want to fall but isn't too keen on the idea of people getting fined either.

There is a chance Elkhart won't write any tickets Friday. The ordinance only applies during times where it hasn't snowed for twenty four hours.

If it snows Thursday night, the clock starts over.