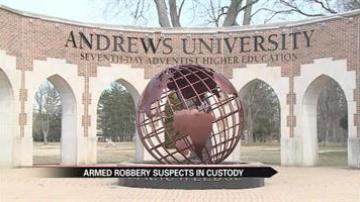 BERRIEN COUNTY, Mich. -- Three people have been charged with the violent robberies on the campus of Andrews University over the weekend. Now students and school officials are questioning whether the alert system needs improvement.

Three people were robbed in three separate incidents on the campus and two of the three victims were injured. The robberies happened at Meier Hall, outside Nethery Hall and outside Garland Apartments between 10:57 p.m. and 11:20 p.m. Saturday.

Seventeen year old Roy Moore, 19-year-old Byron Talbert and 18-year-old Thomas Rogers were all charged in relation to the robberies.

While everyone is happy arrests have been made, students and school officials say the university dropped the ball when it came to communicating with the student body during the emergency.

"Exactly as I was walking out, my roommate was coming back in and he was like yeah, we're on lockdown. If it wasn't for my roommate, I would have not found out," said student Rodolfo Pareds.

Student Robert Valeris said he wasn't aware they were on lockdown either.

"No. I literally found out everything on Facebook. I didn't actually get a message, an official message from the university, until Sunday," said Valeris.

"As we look back at Saturday night, that's something that we really need to work on. We were not as immediate as we could have been or should have been," said Stephen Payne, Vice President of Integrated Marketing and Communication at Andrews University.

"A lot of people kind of felt like there was a lack of communication between the university and the students as far as what was going on. We are all a little bit confused about our security," said Valeris.

The school sent an email out to students the night of the robberies.

It was very descriptive, but it was sent out almost two hours after the robberies happened.

"I just happened to go on Facebook and that's pretty much where I saw there was a robbery or assault that was going on here," said Valeris.

Some students say they understand that it was a chaotic time, but they would have appreciated a quick message to notify them not to leave their dorms.

From a school security standpoint, Payne says this experience was definitely a learning experience.

"Last year we've invested money on everything from new lights to new locking systems on buildings, but that's a constant process you know, how do you make sure that the campus is as safe as possible?" said Payne.

Moving forward, student and school officials agree word of mouth and social media should not be the only forms of communication during a campus-wide emergency.