Emergency Manager Law will not go to ballot over font discrepancy 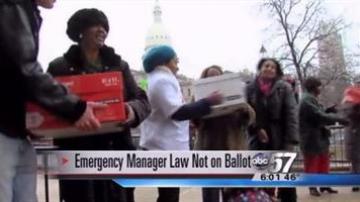 BENTON HARBOR, Mich. -- The Michigan board of canvassers denied 200,000 signatures Thursday that would have repealed the state’s controversial Emergency Manager Law until voters could decide if they wanted it in November.

The ‘no’ vote was because paperwork was typed in the wrong font.

“It just doesn’t make sense,” said Arister Hicks, a retired plumber in Benton Harbor. “The people do not have a voice,” he said.

Hicks was one of more than a quarter million registered voters that signed a petition to put Public Act 4, the law that gives an emergency manager complete control over a struggling city, on the ballot.

“Is this what we say the pledge of allegiance for?” asked Trenton Bowens, a Benton Harbor Commissioner. “Is this what the residents want? Is this what Michigan has come to?”

Bowens said politics got in the way of people’s rights. “Parisian politics decided to take it away,” he said.

Friday, the Canvasser’s Board of four voted on certification of the signatures. Two Democrats voted ‘yes’ and two Republicans voted ‘no’. A deadlock killed the movement.

Reached by phone prior to the results of the vote, Benton Harbor Mayor James Hightower told ABC57 News that had a repeal been successful, not much would have changed in Benton Harbor.

Under Public Act 72, commissioners still wouldn’t decide on anything financial.

Bowens said he would like to see certain ordinances pass in Benton Harbor. He spoke of one that would control rent increases for citizens.

“Right now there’s nobody I can talk to bring forth what I would like to see happen in the city,” said Hicks.

Hightower told ABC57 News that Benton Harbor’s finances are in better shape than they’ve been in decades under the Emergency Manager Law.

David Bullock with Rainbow-PUSH coalition, an opposition group to Public Act 4, said Thursday’s decision will be taken to court. Bullock said state-wide protests will be scheduled in the near future.