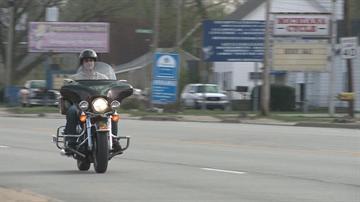 Engines are roaring as more and more motorcyclists hit the road around Michiana taking advantage of the unseasonably warm weather. It’s drumming up business for bike shops, but unfortunately it also means local emergency rooms are becoming crowded.

"It's really made a change in the ER as far as what we see, so we're seeing a lot more of those injuries...that we normally see late May or early July," explained Greg Bingaman, Director of Trauma at Memorial Hospital in South Bend.  “We’re seeing it a lot earlier this year, so it’s going to be a long summer.”

Doctors have been overwhelmed by the number of broken bones, neck injuries and other trauma associated with motorcycle accidents.

"We see a mixed bag, we see both motorcycle versus cars or we see just the single motorcycle going off the road," Bingaman described.

According to Bingaman, over the past four to five years Memorial has seen a 64-percent increase in the number of injuries or deaths related to motorcycle accidents.

“The costs of the motorcycles have come down, gas prices have gone up and sales have climbed,” Bingaman explained.  “So, you have a lot more inexperienced motorcyclists out there.”

Over the past three weeks, Behind the Bars Motorsports in Niles has been swamped by riders coming in to pick up gear and get their bikes serviced in preparation for hitting the road.

"Mostly tires, tires and batteries are very common, people let their motorcycles sit too long and a lot of times the carburetors will gum up on them and then they'll need their carburetors serviced," Owner James Jorgensen explained.  “Just the basic types of service is what we’re seeing right now.”

While Jorgensen is excited to see business climb after a warm winter in which he wasn’t able to service as many snowmobiles, he too is putting out a warning to riders about safety.

"Lot of dirt on the roads still from the salt trucks and what not throwing it all over the place so the corners can be quite treacherous," Jorgensen described.  “Keep an eye out for that, that’s the number one thing, coming into corners and braking, got to look out for that gravel.”

But, safety is a two-way street.  While Greg Bingaman at Memorial Hospital recommends riders ride defensively and wear proper safety gear, he also said drivers in cars need to be reminded to be watchful of motorcyclists as well.

Local police are also reminding drivers that, with warmer weather, more pedestrians, bicyclists, motorcycles and scooters will be out on the road.