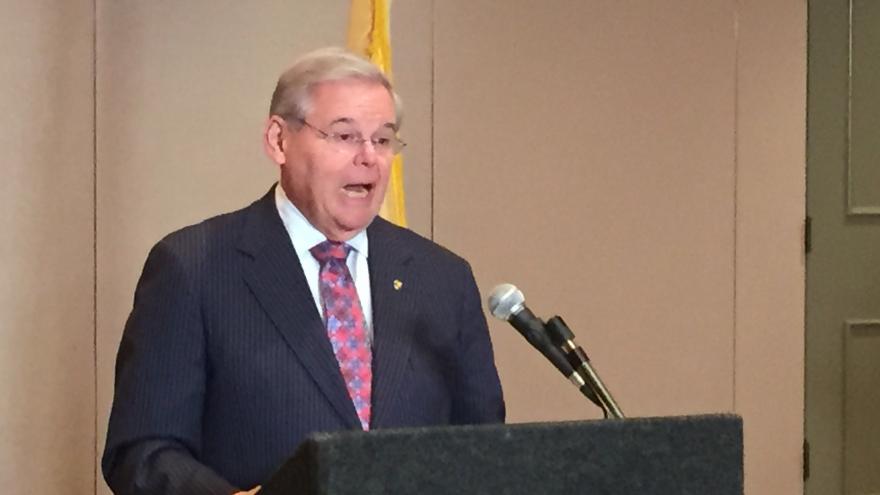 (CNN) -- As he walked into the federal courthouse in New Jersey, Sen. Bob Menendez became emotional.

Speaking to reporters gathered in the rain Wednesday, he appeared to choke back tears as his son and daughter stood by his side.

"Never, not once, not once have I dishonored my public office," said Menendez, a Democrat.

"I started my public career fighting corruption, that's how I started, and I have always acted in accordance with the law and I believe when all of the facts are known, I will be vindicated," he added.

Menendez, wearing a gold tie and a dark suit, sat quietly with his legal team in court as the Justice Department and his own defense attorney began lengthy arguments Wednesday on the first day of his federal bribery trial. Menendez, a senator since 2006, is accused of carrying out an extensive bribery scheme with a Florida-based ophthalmologist, Dr. Salomon Melgen, for seven years. He denies the charges.

For nearly an hour, Peter Koski, deputy chief of the Justice Department's Public Integrity Section, set forth the prosecution's case against Menendez and Melgen in colorful detail, speaking directly to the jury without any notes.

"This case is about a corrupt politician who sold his Senate office for a life of luxury he couldn't afford and a greedy doctor who put that senator on his payroll," Koski said.

Comparing Menendez's lifestyle to one that "reads like a travel brochure for the rich and famous," Koski told jurors that Menendez personally intervened in a number of business disputes that Melgen had with federal authorities in exchange for lavish gifts and large campaign donations.

"This is what bribery looks like," Koski said, adding that "Senator Menendez was Salomon Melgen's personal United States Senator."

The prosecution spent much of its time outlining the "official acts" it claims Menendez allegedly took on Melgen's behalf, including Menendez's attempts to secure travel visas for Melgen's foreign girlfriends, inserting himself in a contract dispute between a company Melgen owned and the government of the Dominican Republic, and smoothing over a $8.9 million Medicare overbilling dispute between Melgen and the Department of Health and Human Services.

"The evidence in this case will show the unmistakable exchange of one man's wealth for another man's influence," Koski said.

Defense attorney Abbe Lowell, representing the senator, dissected the government's allegations point by point for nearly an hour and a half, suggesting that the prosecution had twisted a "real friendship" into a nefarious bribery scheme.

"These two referred to each other as brothers," Lowell told the jury. "(That) gave Dr. Melgen the ear of a senator he might not otherwise have, but that's not a crime," Lowell said, adding Menendez had given Melgen's daughter $1,000 for her wedding and that they had a "two-way gift exchange."

Turning to the issues of the case, Lowell said that many of the issues at hand in the case are legislative issues that Menendez deeply cares about, but emphasized that while Menendez had the power to legislate as a senator, he never used that ability to help Melgen.

"It's wrong for a public official to violate the public trust, but it's equally wrong for an innocent man to be charged," he said. "These might be some of the most important weeks in Senator Menendez's life."

Earlier in the day, the court resolved a few outstanding issues, including an open jury seat, but one of the more fiery and unexpected moments of the day came during a heated exchange between defense attorney Raymond Brown and US District Court Judge William Walls.

Brown admonished the judge at length for an opinion he issued last week rejecting Menendez's attempt to modify the trial schedule so he could participate in upcoming Senate votes in Washington, calling it "extremely prejudicial to the defense."

"I think that the court disparaged the defense," Brown said, pointing to a portion of the ruling in which Walls suggested that the defense team sought to "impress the jurors with the public importance of the defendant senator and his duties."

"You should have known you could not have won that motion," Walls shot back. "I didn't disparage you....You tell me where I have ever speculated to affect the interest of a defendant in front of a jury."

It wasn't the only moment that Walls' personality and wit was on display. Lowell tried to explain that his team submitted jury instructions ahead of trial in effort to comply with the judge's standing order in the case, but Walls waved off the submission as unnecessary at this stage of the trial.

The defense team will continue opening statements Thursday, but Melgen's attorney, Kirk Ogrosky, highlighted that denying the facts is not the strategy.

"All the things that my client offered (Menendez) -- there's no dispute on that," Ogrosky said. "But there was no corrupt agreement. . . . No witness on from the stand, no email, no text message will show that these men had a corrupt agreement."