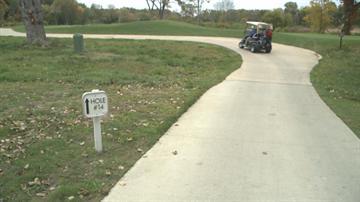 BENTON HARBOR, Mich. – Harbor Shores Golf Course is not the place you would expect a contamination problem. Just 15 years ago, where golf clubs now swing, a radioactive building was knocked down.

The Environmental Protection Agency announced their plans to conduct one-on-one interviews with people in October who feel they’ve been affected by contamination levels and EPA officials will hold a public meeting to discuss new clean-up efforts on October 23rd.

According to Jennifer Cheever with the EPA, radioactive materials were removed but semi-annual tests show contamination exists in the ground water.

“Contaminant concentrations have not been reduced to below acceptable levels,” the EPA notice reads.

“Whatever it is, we need to know about it and how they’re addressing it,” said Benton Harbor commissioner Juanita Henry.

Henry said that she has heard lingering concerns from residents about the site’s proximity to the Paw Paw River.

Cheever told ABC 57 News that she didn’t have the data in front of her but levels of contamination are several times higher in groundwater than what’s considered safe for drinking. She added that cleanup efforts could take several years.

“That’s definitely something the EPA will have to answer for a lot of people,” said Henry.

Cheever said specifics of the new method for cleaning contamination will be addressed at the public forum next month.

The public forum will be held October 23rd at 200 Paw Paw Avenue in Benton Harbor.