Even if shutdown ends, economy likely to suffer 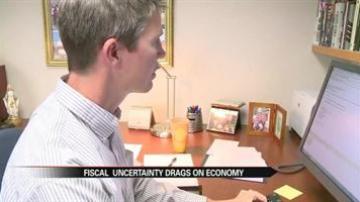 SOUTH BEND, Ind. -- It has taken more than two weeks, but a deal to end the government shut down may have been reached. A local economist says the shut down will have lasting effects in Michiana and the country.

Notre Dame economics professor Timothy Fuerst says Americans are nervous, and that can be devastating to the economy.

"I think people are a little nervous what direction things are going in," said Polack.

"It's sort of like a collective holding of the breath and that is detrimental," said Fuerst.

Fuerst says people fear the unknown, so they're holding on tight to what money they have.

"If you're a business person wondering if you should open an outlet in some store or a worker deciding whether to go back and get your MBA or some more education, whether there's going to be cuts in entitlement or more taxation matters a lot for whether you should do those things," said Fuerst.

Fuerst believes this same uncertainty has been a drag on our economy for the last five years, since the collapse in the housing market and the recession that followed.

"Many would argue that's why the recovery since the 2008 recession has been so slow. Because there's so much nervousness about should I hire, should I not hire," said Fuerst.

"I tell people now just hold on to your money. Just like I tell my staff," said Polack.

Fuerst says even when Congress reaches an agreement to address the debt ceiling and the government shutdown, there will still be a long road to recovery.