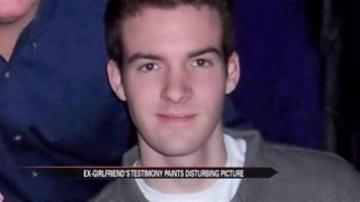 HIGHLAND TOWNSHIP, Mich. -- The ex-girlfriend of the man accused of murdering his mother painted a disturbing picture of what life was like inside the family's home.

Holly Freeman testified that the victim, Ruth Pyne, was off her medication and was dangerous and delusional.

Prosecutors said 22-year-old Jefferey Pyne bludgeoned his mother to death in the family's Michigan garage last year. They claim he was fueled by rage after years of abuse at the hands of his mentally ill mother.

"She believed her medication was sorcery and witchcraft and therefore evil," Freeman said. "She had been storing knives in the headboard of her bed. She watched the religious channel and walked around with the bible."

Defense attorneys maintain Jeffery was not involved in any way with his mother's murder.