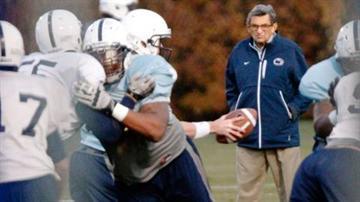 Joe Paterno Jr., whose glittering career as Penn State's football coach was tainted by a child sex-abuse scandal, died today. He was 85.

"It is with great sadness that we announce that Joe Paterno passed away earlier today. His loss leaves a void in our lives that will never be filled," Paterno's family said in a statement.

Paterno coached the Nittany Lions for 46 years and in 2011 became the winningest coach in Division 1 football. But before the season was over, he was abruptly dismissed as the sex scandal involving former assistant Jerry Sandusky suggested that top school officials had ignored signs of Sandusky's alleged predatory behavior.

Shortly after his dismissal, Paterno was diagnosed with lung cancer and broke his hip. Chemotherapy and radiation treatments weakened him, robbing him of his hair and his once-booming voice.

In a recent interview with the Washington Post, he appeared frail, wearing a wig and speaking in a whisper. He canceled public appearances after the interview because of his failing health, according to family members.

For Paterno's legion of fans, who referred to the coach affectionately as "JoePa," the turbulent final months of Paterno's life were a tragic end to an outstanding coaching career that was built around his motto of "success with honor."

Paterno wanted to see them and say a final goodbye, the coach's wife told one of the staff members, the source said.

Hundreds of students gathered around the bronze statue of Paterno on the Penn State campus Saturday night, praying for Paterno's recovery, lighting candles and placing blue and white baseball hats at the foot of the statue.

Paterno's personal life included service in the Army, an English degree from Brown University, a marriage that lasted more than half a century, and a football team's worth of children and grandchildren.

"He died as he lived. He fought hard until the end, stayed positive, thought only of others and constantly reminded everyone of how blessed his life had been. His ambitions were far reaching, but he never believed he had to leave this Happy Valley to achieve them. He was a man devoted to his family, his university, his players and his community," Paterno's family said in a statement.

While at Penn State's helm, Paterno, who was born in Brooklyn, N.Y., led the Nittany Lions to seven undefeated seasons and two NCAA championships, had only five losing seasons, was inducted into the College Football Hall of Fame in 2007, and was nominated for a Presidential Medal of Freedom. The nomination was revoked, however, after the scandal broke.

Paterno was known for his "Grand Experiment" at the university, stressing academic success as well as athletic achievement for his players.

"Just winning is a silly reason to be serious about a game," Paterno wrote in his 1997 book, "Paterno: By the Book." "The purpose of college football is to serve education."

During his tenure, the reputation of Penn State grew from that of a small land-grant university to a nationally ranked research university. The football program ballooned in prestige, with the school's Beaver Stadium expanding six times during his tenure.

Paterno's football program consistently ranked among the top in the NCAA for graduation rates, as well as the top grade point averages for student athletes in Division 1 sports. The achievements helped illustrate Paterno's philosophy on collegiate sports and on life, as he said in a 1973 commencement speech to Penn State graduates, that "Success without honor is an unseasoned dish; it will satisfy your hunger but it won't taste good."

And despite offers from other universities and NFL football teams, including an ownership stake in the New England Patriots, Paterno remained at Penn State, where his base pay was only a fraction of that of other top football coaches in the country. His base pay in 2011 was a little less than $600,000. He and his wife, Sue, donated more than $4 million to the university, which named a library and a campus spirituality center for them.

Paterno was also involved in politics, supporting conservative candidates in Pennsylvania and befriending presidents George H.W. Bush and Gerald R. Ford, who tried but failed to convince the coach to run for office.

Paterno spoke at the 1988 Republican convention in support of Bush.

"I tell you one thing about Joe Paterno, there's no more decent fellow on the face of the Earth," Bush said. "What a man, who sets high standards, he loves his family, he loves this university, he loves his country, and my mother and dad love him."