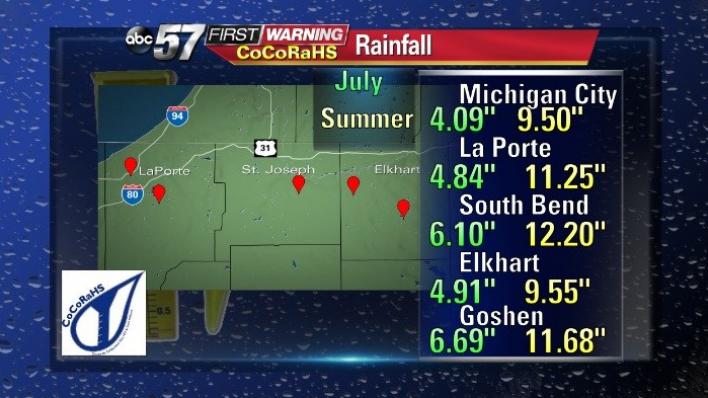 CoCoRaHS, which stands for the Community Collaborative Rain, Hail & Snow Network, is a group of volunteers from all over the nation that measures daily precipitation.  These volunteers are crucial in piecing together daily rainfall amounts in the areas located between local airports, which already record daily weather observations.  The volunteers from our area were crucial in piecing together the highest rainfall amounts from all across Michiana, whether it was monthly rainfall or over the course the summer.

Since June 1st, it seems areas along and south of US-30 have been targeted with the most rainfall, even getting close or topping record rainfall.  For the local CoCoRaHS observer in Rochester, nearly 17.0” of rain has fallen since June 1st.  To put that into perspective, Rochester typically sees 8.49” of rainfall from June 1st- July 31st.  This year is even close to topping the 1998 record rainfall for the summer (June 1st-August 31st).

Those listed in this article are just some of the areas that have seen the heaviest rainfall.  Check out the images to the right to see if your town is featured.  Also, if you would like to learn how you can become a CoCoRaHS volunteer in your area, you can apply here.