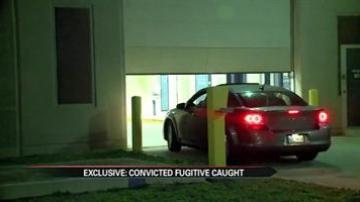 GOSHEN, Ind. -- Daniel Pennington told ABC57 he’s been hiding on a farm in Decatur, Michigan. He ended up there after he responded to an ad for a roommate. He says he figured no one there would know he was wanted, but said he spent every day looking over his shoulder.

“I’m sorry for the pain and suffering I’ve caused the family and the loved ones of the little girl,” said Daniel Pennington, convicted for neglect resulting in death.

For more than a year, Pennington has lived a life on the run from the law. But now this wanted man will sit where he was supposed to be all that time—behind bars.

Back in May of 2011, Pennington pleaded guilty to running over 19-month-old Mariah Gibson with his truck, killing the toddler. Originally he told police it was a hit and run, but then the truth came out: she fell from inside the truck, he ran her over, and then tried to hide it.

ABC57's cameras were rolling minutes before fugitive recovery agents brought him inside the Elkhart County Jail. When we asked if he considered himself a murderer or dangerous, he was quick to respond.

“No, I’m not a murderer and I’m not dangerous. I wouldn’t hurt nobody,” said Pennington.

But when it came time for Pennington to face a judge and his sentencing last May-- he was a no show.  Even now, as he stands handcuffed, he still says it was all a terrible accident.

“Always looking over my shoulder. I’d cry at night,” said Pennington. “Wake up early, losing sleep because it was just painful. I knew I was wanted and now that the load is off of me I just want to get it over with.”

A team of fugitive recovery agents and his female bail bondsman say they can rest easy--they’ve done their job.

“This is pretty big because we’ve had some conflicting information and it’s taken us to multiple states. A lot of man hours,” said Patrick J. Salerno, team leader, fugitive recovery operations group.

But these recovery agents never let the trail go cold.

“I always have hope with my team of these agents around me. I was quite sure that we would stumble onto him,” said Linda Awald, owner of Awald Bail Bonds.

And stumble they did, tackling him to the ground when he tried to run again. But the chase is over and Pennington says he’ll never forget the mistake he made, and the young life he claimed.

“A lot of weight’s come off my shoulders. They’ve been good to me, and I’m just glad I’m here to get it over with.”