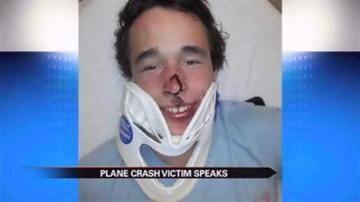 JONES, Mich.  -- ABC 57 spoke exclusively with the fifteen year old boy who survived one of the most recent ultralight plane crash.

Smith says he does not remember falling out of the sky.

"We were turning to land and the pipe broke and knocked me out," Smith recalled.

Smith says since the accident he has focused on enjoying every second of his life.

For his mom, this journey has been a little more difficult.

She says there are no words to describe how she felt when she got the call that her son was in a plane crash.

"It could have killed my boy, but the way the pilot, Scotty braced him in his chair when he saw that they were going to crash saved my son's life at great costs to himself," said Smith's m other.

Smith’s uncle, who was flying the plane, says that he stuck his legs out to try to protect Dillen and take most of the impact.

He  is still in the hospital, he broke his back in three different places and crushed his legs.