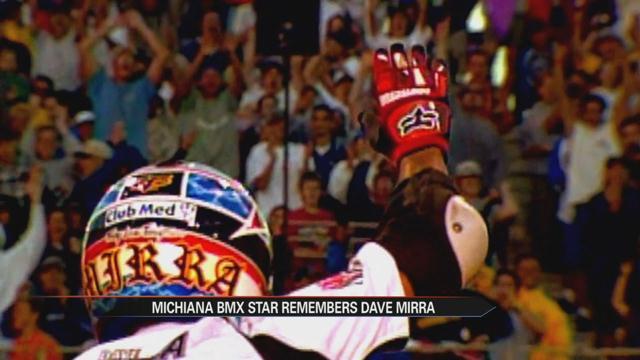 One of Michiana’s most famous extreme sports star remembers his friend, Dave Mirra, after he died Thursday.

An icon of the sport, 41-year-old Dave Mirra died Thursday of what police say was a self-inflicted gunshot wound.

To one South Bend athlete, Mirra was more than just an idol, he was also a friend and competitor.

Their friendship grew at BMX parks and continued off the ramps.

"I would love over my shoulder and there's Dave like hey Dave, ‘what's up you going or me? Me or you, me or you?’ Kind of one of those things and he said ‘hey Brett, go ahead show me what you got or show me something cool’,” said Banasiewicz.

As the news broke across the BMX community, Banasiewicz says many in the sport have been reaching out in complete shock.

“If I needed to talk to a friend, Dave was there, Dave was that friend. I just wish it was vice-versa and he spoke to me or someone about the troubles he was going through,” said Banasiewicz.