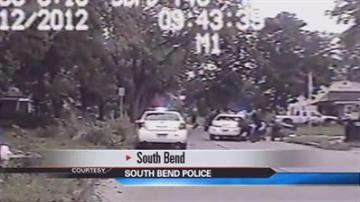 The video was presented as evidence at Biffle’s double murder trial.

Biffle is accused of shooting 53-year-old Johnnie Avance in the head while he was sleeping on his couch, then walking outside and shooting 55-year-old Don Paris, who was walking his dog across the street.

Police say he continued to shoot at passing vehicles and hit both of them.

The video begins after the alleged shootings.

Police say just before you hear the gunfire in the video, they told Biffle to drop the guns he had in each hand and to come out with his hands up.

The defense says he ran out of bullets and wanted to commit suicide by cop.

Biffle was shot several times. The video shows officers and EMS personnel coming to his aid.

He lost a thumb and a leg – but survived.

In the third day of trial, the judge heard from three doctors who specialize in mental disorders.

The defense claims Biffle is not responsible for his actions because he was insane at the time of the shooting.

Two of the three doctors who specialize in mental disorders testified he didn’t meet the criteria of having a serious psychological disorder. They testified they believed he was sane at the time of the alleged shooting.

The other doctor could not draw a conclusion.

Biffle's case is now in the hands of the judge. She said she would announce her verdict in a week.