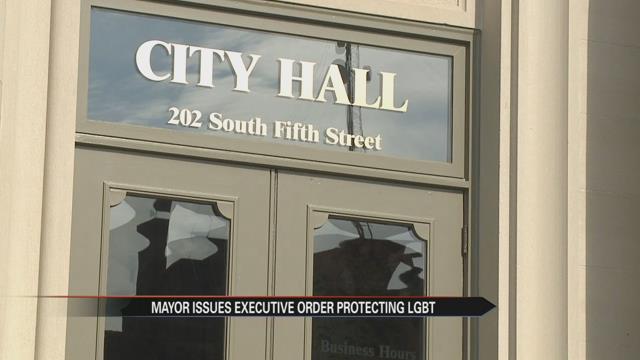 Mayor Allan Kauffman made a strong statement today by issuing an Executive Order regarding LGBT protection in the City of Goshen.

The Executive Order adds LGBT protection to the city’s hiring process. The mayor cannot force all employers to carry out the protection but this is a significant move for the community of Goshen.

Only a handful of cities in the state of Indiana include sexual orientation and gender identity in their civil rights ordinance.

Some residents in Goshen say the decision is pretty progressive.

“A change that we are seeing to make our community more open and welcoming,” says Ardean Friesen of Goshen.

Friesen cares about Goshen and has lived in the city for over a decade. He attended the common council meeting that discussed LGBT protections, on August 4th.

“There were a number of people who spoke in favor of updating the ordinance for inclusion of LGBT and there are a number of those who are very passionate about not having that group protected,” describes Friesen.

Mayor Kauffman had not made a public statement on the discussion held at that meeting until Thursday August 13th.

The city’s Community Relations Commission, CRC, is now responsible for investigating cases of sexual orientation and gender identity discrimination based on a recent federal ruling by the Equal Opportunity Employment Commission.

“I think having these kinds of things on record can only be helpful and opening and welcoming our community to all folks,” says Friesen.

The Mayor is also asking that the CRC set up a separate committee to continue the discussion on civil rights for the LGBT community and address issues brought up by those who oppose the LGBT protection.