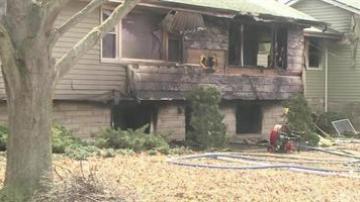 NILES, Mich. -- A homeowner called 9-1-1 after hearing explosions in his house on M-140 in Niles, Michigan. There were 5,000 rounds of ammunition in the home and that made fighting the fire more difficult and dangerous.

"It was quite extensive. When I talked to them at the back of the structure and told them there was probably 5,000 rounds of ammo in the basement, they said 1,000 had gone off already," said Gary Brovold, Chief of the Niles Charter Township Fire Department.

Firefighters were stunned by the sounds of explosions coming from the basement of the home on M-140 in Niles.

One man was inside when the fire started around 10:30 a.m. Tuesday. According to police he heard explosions, ran outside, and called 911.

Eleven fire departments were called to assist in fighting the fire because crews had trouble getting enough water and manpower to the scene.

"A lot of volunteer firefighters are at work so it was an issue getting enough manpower here. We had to keep calling for additional box levels to get enough people here," said Brovold.

Manpower wasn't the chief's only concern. Crews were worried the home might collapse because the basement was fully engulfed.

"When you have a basement fire, we are really concerned about the floors within the structure because those floors could give way and your firefighters could drop down. So there was extra caution taken in the initial stages to make sure the floor was sound," said Brovold.

Firefighters crawled into the basement to spray water on the exploding ammunition.

Borvold says the fire spread through the walls and blew out the back of the building.

"Another detriment we had is an older home like this, we had electric heat in the ceiling which is multiple layers of plaster and wires so it's very difficult to tear apart and overhaul it," said Brovold.

Brovold said because of the quick action of the volunteer firefighters, the homeowner might be able to save some of the files he needs for his trucking company.